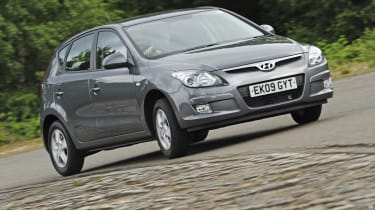 The Hyundai brand demands to be taken seriously. From the excellent i10 city car through to the rugged Santa Fe SUV, the Korean outfit’s models are now good enough to get established manufacturers hot under the collar.

And sitting in the middle of the range is the i30 hatchback. Designed to take on popular rivals from Europe and Japan, the five-door is a huge leap forward over its lacklustre predecessors. Not that you’d know it from the outside.

While the Hyundai’s shape is modern and clean, it lacks the arresting appearance of the Mazda and Chevrolet. However, you do get neat details, including upright rear lamps and standard alloy wheels. Elsewhere, the design is inoffensive rather than eye-catching.

Climb aboard and you’ll find the solidly constructed interior is similarly lacking in flair.

But the plastics have a quality look and feel, the dashboard is logically laid out and the blue instrument lighting adds a touch of class at night. And you won’t be short of kit, either, because air-conditioning, an iPod connection and trip computer are all standard on our Comfort trim test car.

Practicality is a strong feature, too. You’ll be able to squeeze five adults inside, with those in the rear getting good head and legroom. Better still, open the large tailgate and you’ll discover a useful 340 litres of carrying capacity – equalling the Mazda, but 110 litres shy of the saloon-only Chevy. Fold the rear seats flat, though, and you’ll have 1,250 litres at your disposal.

Once at the test track, it’s the Hyundai that leads the way.

Its 124bhp 1.6-litre engine isn’t as smooth as the 3’s unit, but is the most powerful of our trio. In every one of our tests the Hyundai was quickest – its 10.5-second 0-60mph sprint time was more than three seconds faster than the Cruze.

Impressively, the i30’s straight-line pace doesn’t come at the expense of fuel economy. The Hyundai returned 27.8mpg – it was 1.4mpg more efficient than its nearest rival, the Mazda.

Out on the road the i30 feels composed and capable.

Its ride soaks up the worst of the bumps, while the well weighted and precise steering allows you to place the car accurately in corners.

However, with skinny 185-section tyres, the front of the i30 loses grip much earlier in corners than either of its competitors. It’s safe and predictable, but can’t match the sharp-handling Mazda for driver involvement.

Add in the Hyundai’s long list of standard equipment and its excellent five-year warranty, and it makes a tempting proposition.

Chart position: 2WHY: Practical, well equipped and with a superb warranty, the i30 has the measure of the European establishment.