Mazda’s new 3 is already proven as a top family hatch. Now, the entry car meets great-value rivals from Hyundai and Chevy in a budget battle 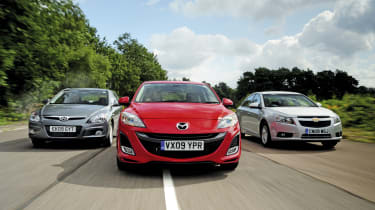 The new Mazda 3 has banished the memory of its rather bland predecessor. Range-topping versions of the latest Japanese hatch combine style, practicality and sharp driving to impressive effect, and the model ran the Volkswagen Golf close in the compact family class at Auto Express’s New Car Awards 2009.

But what about lesser versions of the Mazda? With prices starting at £13,500 for the 1.6-litre S, it undercuts established rivals – and falls into the clutches of value-for-money alternatives.

Newest of these is the Chevy Cruze saloon. What it lacks in hatch versatility it makes up for with a long list of kit, sharp looks and a capable chassis shared with Vauxhall’s new Astra.

Hyundai’s i30 has a five-year warranty. It’s shocked European rivals by mixing the Koreans’ traditional value with desirability and dynamic talent. And at £12,600, it undercuts the Mazda by £900. Which of our trio is our champion?

What this test proves is that you no longer have to settle for second best when buying on a budget. For the price of a mid-spec supermini, our contenders serve up family car versatility. But which of the three takes victory?

The Chevy makes a strong case for itself. It’s well equipped, looks striking and has a composed chassis. Plus, even though it’s available only as a four-door, it’s practical, too. But the engine is off the pace here, and poor residuals leave it trailing.

That means the Mazda and Hyundai fight it out for top honours. The i30 is a huge leap forward, and is easily a match for established rivals. It’s solidly built, good to drive and has a huge spec list, so it appeals on many levels. Add the company’s famous five-year warranty, and the car is extremely tempting.

However, it can’t quite match the Mazda in this test. Even after a short drive in the 3, the quality of its engineering shines through. What’s more, the Japanese hatch is practical, beautifully built and delivers class-leading residuals, which offsets the higher price. If your budget stretches that far, the Mazda is worth every penny.