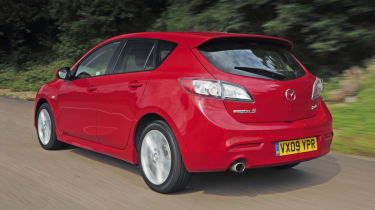 If you’re looking for a family car with style, the rakish Mazda 3 is likely to be on your shortlist. As the most recent arrival in the sector, it brings the five-door hatchback template bang up to date.

Even in entry-level trim, the Mazda is the most eye-catching model in our group. The car supplied for our pictures is a top-spec Sport, but it shares the same basic form as other versions in the line-up. At the front the 3 is clearly influenced by the RX-8 and MX-5 sports cars, with a bold grille and large, swept-back headlamps.

Elsewhere, you’ll spot neat details such as the swooping character lines in the flanks and ice-white tail-lights. Only standard wheel trims instead of alloys and black-painted mirrors mark out the S as the most basic model. The designers haven’t limited their flair only to the exterior, either, as the Mazda has by far the most dynamic dash of our trio. The split-level instrument layout works well, although the contrasting backlighting for the trip computer screen and radio display looks a little odd.

Quality isn’t an issue, though, as the 3 is well assembled and uses top-drawer materials throughout, while the switchgear feels precise and positive. The excellent finish and versatility go some way to making up for the less-than-generous kit count.

Air-conditioning is standard, but otherwise the Mazda feels a little spartan. Rear seat passengers have to wind down their windows by hand, and there are no steering wheel-mounted controls for the stereo. At least the cabin is spacious and versatile: occupants are treated to as much room as they will find in the Hyundai, while folding the rear bench flat liberates a healthy 1,360 litres of carrying capacity in the boot.

The Mazda loses out to its rivals in the power stakes, although its 103bhp 1.6-litre petrol engine is smooth and refined. On paper, it promises to be the least potent here, but on the move the Japanese car feels surprisingly keen, and it also proved to be quicker against our stopwatch than the lacklustre Cruze.

Yet the 3 really comes into its own when you head down a twisty back road. With quick and direct steering, strong grip and good body control, it has the feel of a junior hot hatch. Adding to the driving enjoyment is the precise and well weighted gearshift that clearly takes its cues from the MX-5 roadster.

This agility doesn’t come at the expense of refinement, either: the Mazda copes well with poor road surfaces, while wind and tyre noise are well suppressed. However, there is one aspect you can’t ignore: its price. At £13,500, the Japanese hatchback is nearly £1,000 more than the better-equipped Hyundai i30. While the 3 is well built, practical and great to drive, it will have its work cut out to convince buyers on a budget.

Chart position: 1WHY: Stylish Mazda hatch has impressed against premium opposition. Can entry car do the same with value rivals?