Has retro model’s cool image and sense of fun been diluted in this new entry-level version? 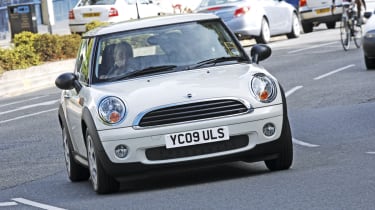 The MINI has been a huge hit, in terms of sales and desirability. But while the original Fifties car was all about providing cheap utilitarian transport for the masses, the 21st century version has always majored on style and image. Now, though, the British brand is going back to basics with the introduction of its cheapest model yet: the First.

And the good news is that, from the outside, it’s hard to tell apart from the rest of the range. Look closely, and the clues are there – plastic wheel covers are the biggest giveaway, but the discreet First badges on the B-pillars and matt black body trim that also identify the entry-level car are more subtle.

The roof gets body-coloured paint rather than being finished in a contrasting shade, and alloy wheels aren’t available even on the options list. Yet the First still manages to look handsome, with its wheel-at-each-corner stance, wraparound windscreen and chunky proportions.

From the driver’s seat, you could be forgiven for thinking that you were sat in a premium product, worth far more than its £10,950 price. Everything feels reassuringly solid and well built – especially the soft-touch plastics on the dashboard.

Only some of the trim on the centre console and the cheap two-spoke plastic steering wheel let the cabin down.

You can solve the latter issue by specifying a leather rim, but this is available only with the £855 Tech pack, which also brings Bluetooth and a CD player upgrade.

Equipment is adequate rather than generous, with air-conditioning a pricey £665 option – both competitors in this test get it as standard.

Settle in, though, and you’ll find that the MINI has the most natural driving position of our trio. In contrast, you feel like you sit too high in the Toyota and Fiat.

And while the First’s hatchback body isn’t quite as practical as that of the firm’s Clubman estate, at a pinch you can squeeze two adults in the back – this is simply impossible in the iQ.

The MINI’s boot is tiny, and is beaten for space by the larger Fiat. But by dropping the First’s rear seats you can achieve a respectable 680-litre load area.

On the move, the 1.4-litre engine is refined, yet slow to rev. A heavier kerbweight and power deficit of more than 20bhp ensured the MINI was the least impressive of our trio against the clock at the track. The sprint from 0-60mph took 13.5 seconds – that’s 2.6 seconds longer than its closest rival.

Our in-gear times told a similar story, and you have to work the smooth-shifting six-speed transmission hard to maintain pace. Steering feel is superb, though, and the well judged suspension allows you to sense exactly what the car is doing.

Its set-up is firm compared to that of the 500 and iQ, yet body control is exemplary and the MINI has the sharpest responses here.

The great handling that distinguishes the rest of the range is undiluted in the First, then, which makes the £10,950 list price seem too good to be true. But by the time you’ve added the air-con option, the MINI is much closer to its better specified rivals on cost.

You will be unable to match the iQ’s generous kit tally, as only a limited range of options is available on the new First. The spartan cabin does provide some benefits, though, because the shortage of equipment keeps the weight to a minimum.

This worked in conjunction with the underpowered engine’s clever stop-start technology to help the MINI return 40mpg in our hands. Emissions of 128g/km are also lower than the more powerful Fiat (149g/km).

Servicing costs look incredibly good value, too, thanks to the company’s famed tlc package, which covers the first five years’ maintenance for only £185.

If you can see beyond the entry machine’s lack of performance, you’ll find a desirable and enjoyable supermini with low running costs. But will the latest baby Brit live up to its name and come first in this test?

Chart position: 1WHY: New entry-level MINI brings the retro legend within reach of a wider audience than ever. So, just how good is it?