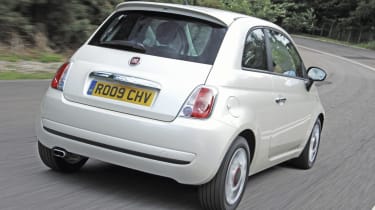 The original Fiat 500 wasn’t a massive hit here in the UK, but that hasn’t stopped its modern counterpart from capturing our imagination.

Retro looks, a stylish interior and characterful engines mean the reborn legend has given MINI fans an alternative – and it’s our reigning city car champ.

Fiat’s designers effectively reinvented the Fifties 500 for a modern audience. The styling works best from the front, where the round headlights and horizontal grille bar present a friendly face.

Neat detailing includes stylised 500 graphics on the wheels, as well as chromed door handles and a rectangular exhaust finisher.

But our Sport test model does little to convey its racy image – even the red brake calipers are a £150 optional extra.

And although its interior can’t match the MINI’s quality, the Fiat really holds its own in terms of style. From the body-coloured facia to the deep cowled instrument pod, its layout is the most distinctive in this test.

The three-spoke leather steering wheel and high-mounted gearstick are well positioned and good to use, although the shift isn’t as well weighted as the MINI’s. Plus, while the seats are trimmed in attractive leather and cloth, the heavily sculpted side bolsters are too soft, and we would have liked the driver’s to adjust lower.

Decent headroom throughout means that the back seats are perfectly usable, and the Fiat has the largest boot. With the rear seats in place, it provides 185 litres of space.

The Fiat’s 1.4-litre engine delivers 130Nm of torque, while its 100bhp output is the most powerful on test. This shows when you drive the car.

In-gear pace was just as impressive – the Fiat left both rivals trailing by more than two seconds from 50-70mph in fourth.

You have to work the engine hard to achieve these figures, as peak power is not produced until 6,000rpm, but the unit is eager to rev. The 500 is also equipped with a Sport button, which sharpens throttle and steering responses.

But while it adds weight to the wheel, it doesn’t improve on the steering’s lack of feedback.

On motorways, the 500 doesn’t ride as well as its competitors, bouncing over expansion joins and potholes, and taking time to settle again.

The problem is highlighted on A-roads by mid-corner bumps, which send the rear skipping around bends.

Our test fuel return of 37.5mpg was reasonable, but the power on offer translates into 149g/km of CO2 – that’s the highest on test, and means big tax bills.

Even so, if style and fun are high on your list of priorities, the Fiat 500 1.4 Sport could well be worth paying the extra for.

Chart position: 2WHY: For the first time, the Fiat 500 competes on a level footing with the MINI – they’re only pounds apart on price.