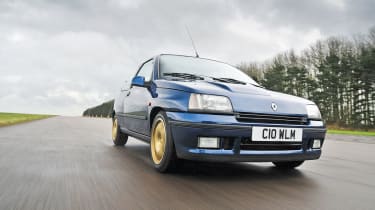 Climbing inside the Clio Williams is like stepping into a timewarp. Compared to the other three cars we have here, the squashy velour seats, high driving position and compact cabin all feel like the product of a different era.

This beautifully maintained example not only has an illustrious roster of former owners, including Sir Frank Williams – the car was a gift to him from Renault – but a plaque by the steering wheel announces it to be ‘0001’ – the very first built. Fire up the engine and pull away, and it’s clear the performance gap to the more modern contenders here isn’t as big as you might think. The car weighs in at only 990kg, and the 150bhp engine provides huge amounts of straight-line shove.

At low speeds the unassisted steering is a struggle, but put your foot down and it has a lovely weight and communication to it that’s lacking from newer models. In corners the car requires a whole new driving style, too. Keep the throttle pinned and it holds its line well. Yet as there’s no form of stability control and rear-end grip is lacking, even the slightest lift-off from the accelerator while the tyres are loaded up results in oversteer.

It’s huge fun, but takes some getting used to considering the vast reserves of traction we take for granted in modern cars.