Late arrival in this class is gunning for the top 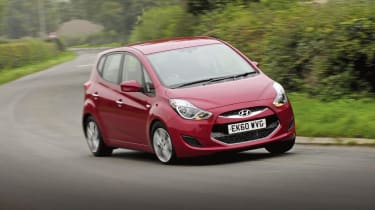 4
It’s hard to make an impression at a party when you know your near-identical twin brother has arrived to a rapturous welcome before you!
That’s the challenge facing Hyundai – the Venga beat it to UK showrooms, and we’ve already named it Best Supermini-MPV at our New Car Awards 2010. Fortunately, there are a few styling differences that give the ix20 a chance to stand out.
Video: watch CarBuyer's video review of the Hyundai ix20
[[{"type":"media","view_mode":"content_narrow","fid":"68597","attributes":{"alt":"","class":"media-image"}}]]
At the front, the slim grille, complex honeycomb trim and unique headlights set it apart, while at the rear a prominent Hyundai badge, number plate lip and revised lamp clusters distinguish it.
Look past these changes, however, and it’s clear the ix20 shares its basic shape with its Kia cousin. Which design you prefer is down to personal taste, but to our eyes the newcomer looks classier and more distinctive.
The external dimensions and interior architecture are identical, so it’s no surprise to find the Hyundai is every bit as roomy, practical and well laid out as the award-winning Venga.
The high-set driving position gives a commanding view of the road – although thick A-pillars cause a worrying blindspot – and the large windows create a bright and airy atmosphere. The rear bench has a neat split/fold and slide function, while the completely flat floor frees up extra space for feet.
Open the large tailgate, and you’ll find a generous 440-litre load bay, while stowing the rear seats liberates a useful 1,253 litres of carrying capacity. As with the Kia, there’s additional storage beneath the boot floor, and the cabin is littered with useful trays, bins and cubbies.
While the layout is similar to the Venga’s, designers have clearly made an effort to give the ix20 a different look. The dash gets a glitzy piano black and silver finish, while the dials and buttons are backlit in an eye-catching blue. Elsewhere, the grille’s distinctive honeycomb pattern is repeated on the speaker covers and seat fabric.
There’s little to complain about when it comes to quality, as the ix20’s cabin is solidly screwed together. Some of the plastic trim looks and feels a little cheap, but overall the Hyundai matches the Nissan in terms of fit and finish. It’s nearly as well equipped as its British-built rival, too.
In mid-range Active trim, the ix20 features Bluetooth connectivity, electric windows all-round and parking sensors as standard; to get the same kit on the Venga, you’ll have to pay extra. The leather on the well shaped steering wheel also feels more expensive than the covering used on the Kia. But there’s little to separate the pair on straight-line pace.
Under the bonnet is the same 89bhp 1.4-litre diesel as in the Venga. Our test model had only a few hundred miles on the clock, and at the test track, it was a few tenths of a second slower than its well run-in stablemate in nearly every acceleration increment. But the real-world differences are barely noticeable.
Despite delivering a healthy 220Nm of torque at only 1,750rpm, the reasonably refined powerplant needs to be worked hard to haul the 1,370kg ix20 around. On the plus side, the six-speed
transmission has a slick action, while a tall top gear results in relaxed motorway cruising.
Long-distance comfort is further boosted by the supple ride. Engineers have worked hard to tune the suspension for UK roads, and the results have been largely successful. The ix20 can’t quite match the Note for fun and agility, but it’s composed and capable through a series of corners.
It’s the car’s ability to deal with poorly surfaced roads that really impresses, though, as it shrugs off bumps and potholes that the Kia crashes and thumps over.
Most buyers will be won over by the Hyundai’s wallet-friendly finances. At £13,395, the ix20 is the cheapest model in this test, while its five-year warranty and breakdown package adds real peace of mind. Has the supermini-MPV sector got a new champion?

Chart position: 1WHY: With the same chassis and CRDi diesel as the Venga, the ix20 has all the ingredients to challenge the class leader.