Does recent revamp take former class champion back to the top? 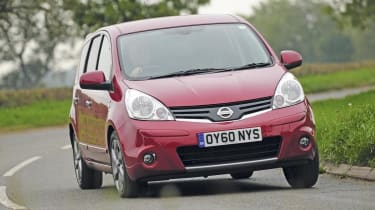 4
The Juke crossover proves Nissan isn’t afraid to let its designers get bold. The British-built Note isn’t as daring, but four years after launch, it still looks the part.
A recent mid-life update brought some minor changes to the detailing, yet thanks to its wheel-at-each-corner stance and well proportioned shape, the car looks just as up to date as its younger rivals in this test.
The cabin hasn’t changed much, either, although it wasn’t in need of a major overhaul. While the dash design isn’t exciting, it’s straightforward and the whole interior feels solidly put together.
Material quality is also decent. A lidded cubby houses the Aux-in and USB sockets – so unlike in the other two cars, you can keep your MP3 player out of sight – and the underseat stowage area is another neat touch.
Even though the steering wheel doesn’t adjust for reach, finding a comfortable driving position is easy. Forward visibility is better than in the Korean duo, too, thanks to the more upright design and thinner windscreen pillars. However, some buyers will prefer the Kia and Hyundai’s slightly more lofty ride height.
In the rear, the bench slides to optimise passenger or load space. Push it fully back, and the Nissan provides 100mm more legroom than its rivals, although in this setting, boot volume drops from 437 litres to 280 litres. And unlike in the other cars, the Note’s bench only slides as one, and doesn’t move independently in a 60/40 split. The backrests are split, though, and they fold to achieve
a flat load area when used with the removable false boot floor.
Overall, the Nissan offers excellent passenger space, but it’s ultimately not quite as flexible as its rivals. It’s better equipped, though (sat-nav comes as standard in n-tec trim), and despite being four years old it doesn’t lose out dynamically.
Light controls make the car easy to drive in town, motorway refinement is good and the ride has a suppleness that’s missing from the Kia. Some shocks still enter the cabin over really rough surfaces, yet you don’t get the intrusion that takes the edge off the Venga’s comfort.
Through corners, the Note’s steering feels over-assisted, but the weighting stays consistent as you apply lock – unlike in the other models – which gives more confidence. The car turns into bends with enthusiasm, and is the most agile of the trio.
The smooth 1.5-litre dCi diesel engine provides similar performance to the other models’, and proved the most fuel efficient choice.
When you consider that the Note n-tec is now cheaper than the Venga 2 and comes with much more kit as standard, it’s easy to see why the revised Nissan is a serious contender in this class.

Chart position: 2WHY: Spacious, functional and good to drive – the Nissan Note set the standard at launch in 2006, and it’s just been refreshed.