Our favourite supermini-MPV faces a fight to keep its crown 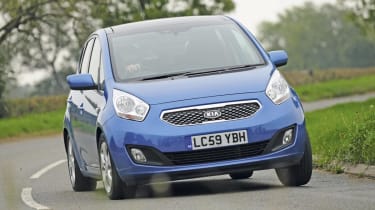 4
You can’t fail to have noticed Kia’s meteoric rise. In only a few years, the ambitious Korean company has gone from budget brand also-ran to a genuine rival to mainstream manufacturers.
Its comprehensive model range features everything from cheeky city cars through to full-size SUVs – and one of the leading lights of its line-up is the versatile Venga. Launched earlier this year, it proved an instant hit, and was crowned Best Supermini-MPV at our New Car Awards 2010. So it represents a formidable challenge for its rivals.
The Venga certainly isn’t held back by its styling. Unlike the boxy Nissan, the handsome Kia bears a closer resemblance to a regular supermini than a traditional MPV. Neat details like the large, swept-back headlamps and bold chrome front grille add to the appeal. The 3 model in our pictures gets a panoramic sunroof; this doesn’t feature on our 2 test car, although attractive alloys do.
Whichever spec you go for, there’s no escaping the visual similarity to the Hyundai. Apart from reprofiled bumpers and different light clusters front and rear, the two cars are virtually identical.
Inside, it’s clear the designers have made more of an effort to separate the pair.
The Kia has an attractively styled and functionally laid out cabin. The dashboard is logically arranged and features decent-quality materials. There’s plenty of kit, too. Air-conditioning, an iPod connection and front electric windows are all standard, while the steering wheel and gearlever get a leather finish – although the hide feels a little artificial.
It’s the amount of room on offer that really impresses, though. Despite its compact exterior dimensions, the Venga rivals cars from the class above for space. You get bags of headroom, while the sliding rear bench lets owners choose between extra legroom or increased carrying capacity.
Even with the seats set for maximum legroom, the load bay will still accommodate 440 litres of luggage – that’s 160 litres more than the Note swallows. Better still, lifting the boot floor reveals a deep storage compartment that’s perfect for stowing valuable items away from prying eyes. As you’d expect, the Kia focuses on practicality over performance – and this was highlighted at the
track.
The 0-60mph sprint took 12.1 seconds, which is three-tenths down on the less powerful Nissan. In the real world, the Venga has to be worked hard to keep up with faster traffic, while its 1.4-litre diesel is more intrusive than the identical unit in the Hyundai. A firm suspension set-up and direct steering result in surprising agility through a series of corners. Unfortunately, the price you pay for the nimble handling is a stiff ride, as the Kia crashes into potholes and fidgets on the motorway.
At £13,460, it still represents decent value for money, but it’s more expensive than the better equipped ix20. So the Venga’s grip on the supermini-MPV crown could be weakening.

Chart position: 3WHY: Our reigning supermini-MPV champ does without gimmicks, but gets all the basics spot-on. It’s roomy and affordable.