Meaty new four-door aims to live up to legend 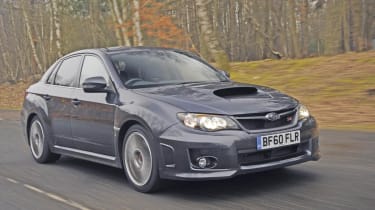 6
When the original Impreza Turbo was released in 1993, it proved an instant hit. With its mix of sensible saloon car practicality and rally bred performance, the Subaru became a cult hero.
However, the latest hatchback model has failed to find favour with buyers. So top brass at the company are attempting to recapture the magic with a new four-door WRX STi.
From head-on, you’d be hard pushed to tell the saloon from the hatchback, as it features the same signature bonnet scoop and wide flared arches. But it’s all-new from the B-pillars back, as a traditional saloon rear has been grafted on.
To our eyes, it’s not an entirely successful addition – the boxy tail, with its satin-finished chrome trim, sits uncomfortably with the rest of the rounded and bulging bodywork. The WRX STi’s cabin has been carried over unchanged from the hatchback, so you get the same dated, low-rent look and feel. Still, the Recaro front seats offer plenty of adjustment and side support, while there’s a raft of standard kit – including Bluetooth, an iPod connection and climate control.
Thanks to the high roofline, occupants in the rear get lots of headroom – more than in the sharply styled Insignia. Lift the tailgate, though, and the STi trails, with its 420-litre load capacity
80 litres down on the VXR’s. Worse still, the boot is poorly trimmed, with exposed screws and nuts on the underside of the parcel shelf, and the small opening makes loading large items awkward.
But hot Subarus have always been about the driving experience, and the new saloon is no different. Fire up the 2.5-litre boxer engine, and you’re treated to the trademark off-beat thrum, while a blip of the throttle sees the noise increase dramatically. It’s a formidable unit, with power and torque outputs of 296bhp and 407Nm respectively.
At the track, the grippy four-wheel-drive system helped the newcomer blast from 0-60mph in only 5.5 seconds – that’s a full second faster than the Insignia.
On the road, accessing the performance on tap involves working the STi harder than the VXR. At low revs, the car feels a little lethargic until the turbocharger kicks in.
Above 3,000rpm, the unit responds instantly and delivers incredible overtaking punch.
As you would expect, grip is immense through corners, while the SI-Drive system allows you to tailor the driving experience to suit the road conditions. If only it also improved the steering; while the rack is direct and accurate, it lacks weight and feedback.
An extremely firm ride and clunky gearchange further dent the driving dynamics. Yet despite these flaws, the STi is still a thrilling companion for blasts down twisting back roads, with a mix of searing pace, a distinctive soundtrack and strong poise making it a more engaging proposition than the Insignia.
For ultimate performance, the WRX STi remains untouchable – although the VXR offers much more than outright acceleration. Will the more focused approach of the Subaru be enough for
it to regain its title as the best fast four-door?

Chart position: 2WHY: To match savage pace, WRX STi has wild looks. Boxer engine is full of character, and 4WD gives bags of grip. Saloon body is a nod to past.