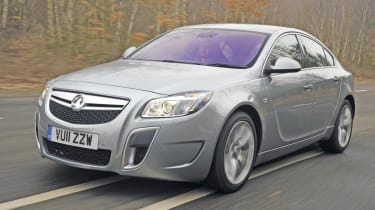 5
It was US President Theodore Roosevelt who said you should speak softly and carry a big stick if you wanted to go far. Bosses at Vauxhall clearly endorse this approach, as the firm’s range-topping Insignia VXR aims to secure super-saloon honours with its combination of knock-out performance punch and subtle, sober-suited looks.
At a glance, you’d struggle to tell the VXR apart from lesser versions of the Insignia. The car in our pictures is a five-door hatch, although it’s visually identical to the saloon tested.
Eagle-eyed fans will spot the ‘Sabre-toothed’ front bumper, square-edged twin tailpipes and 18-inch alloy wheels, but the handsome Vauxhall can’t match the Subaru for impact. That’s not to say it’s not without appeal, because the sleek and handsome lines make it a more grown-up choice.
Inside, it’s a similar story, with decent-quality materials and solid build combining to give an upmarket air. There’s also plenty of standard kit, although you’ll have to pay an extra £220 for Bluetooth – it’s standard on the Impreza, as is keyless entry.
Elsewhere, the driving position is excellent and the Recaro sports front seats provide plenty of support. Occupants in the back get more legroom than in the Subaru, but the VXR’s sweeping roofline means taller passengers will find the ceiling a little low.
Behind them is a spacious 500-litre load bay, although as with the WRX STi, the Vauxhall doesn’t come with a flat boot floor – and this ultimately damages the car’s luggage carrying capability.
Still, practicality isn’t as important as performance in this shoot-out – and at the test track, the VXR trailed. With its 320bhp 2.8-litre turbocharged engine, it’s no slouch, but it was a full nine-tenths down in the sprint from 0-60mph, recording a time of 6.4 seconds. The Vauxhall also trailed during our in-gear tests.
These numbers tell only half the story, though, because in the real world, the lusty power delivery makes the Insignia an effortless performer. While the six-speed gearbox is let down by a long throw, it has a slick and light action. And the Subaru needs to be worked hard to keep its nose ahead.
Point the VXR’s nose into a corner, and you’ll discover impressive composure and plenty of grip. A special front suspension set-up, adaptive damping and electronically controlled four-wheel-drive system all help to make it an agile and entertaining choice.
The steering could do with more feedback, but overall this is a less tiring proposition than the frenetic Subaru.
Better still, when you’re not blasting down back roads, the Insignia switches seamlessly into a relaxing long-distance companion. Road and wind noise are very well insulated, and only the firm ride reminds you of the car’s racy intentions.
The VXR carries a saving of only £5 over the Subaru, with a price tag of £32,995. But with its smart looks, searing performance and composed handling, the Vauxhall is clearly a strong contender for victory.

Chart position: 1WHY: VXR performs nearly as well as the Subaru, but is a more sophisticated package. Sleek looks and upmarket interior make it a grown-up choice.