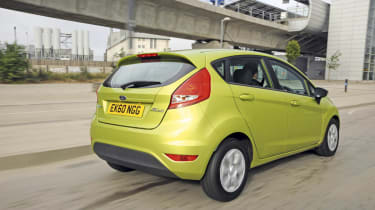 2
Can anything stop the Fiesta? Ford sold more than 103,000 examples of its supermini last year (25,000 more than the Corsa), but will the arrival of its facelifted rival bring about a change in the blue oval’s fortunes?
Not if styling is an important part of the equation. The Fiesta is the youngest model here, and puts its youth to good use. The sleek profile and purposeful proportions lose none of their appeal in ECOnetic guise, and only our car’s simple wheel trims give away its green credentials.
It’s the same story inside, where the familiar Fiesta cabin is unaltered. You get the same widely adjustable driving position, classy instruments and distinctive centre console design that we’ve praised in the past. Only the cheap ventilation controls and interior door releases spoil the high-quality feel.
Passenger space is competitive, too. There’s as much rear legroom, and almost as much headroom, as in the boxier Corsa. And the tailgate lifts to reveal a class-leading 295-litre boot.
Only when you look at the standard kit included in the price does its status as the cheapest car on test begin to show. Fitting desirable features such as Bluetooth connectivity and a USB socket will add £200 to the £14,495 list price. They come as standard on the Peugeot, so the Ford’s price advantage over the 207 is instantly wiped out.
The Fiesta includes plenty of green technology as standard, though. Fuel-saving features range from low-rolling resistance tyres and optimised engine calibration, to taller gearing and aerodynamic air deflectors.
Sports suspension also lowers the body by 10mm to cut drag and, as in the Vauxhall and Peugeot, a gearshift indicator prompts you to swap ratios to maximise economy. Customers worried that this focus on efficiency will ruin the Ford’s class-leading dynamics can sleep easy, because the Fiesta is more engaging and enjoyable to drive than its rivals. It retains the sharp responses and agile handling that have become hallmarks of the Ford line-up.
Its precise and well weighted steering, positive gearshift and sure-footed chassis are matched to a smooth 1.6-litre TDCi engine that makes the Vauxhall feel harsh in comparison. The only possible criticism concerns the low-speed ride comfort, which, due to the sporty suspension set-up, has a firm edge. But well judged damping ensures the Ford never loses its composure over ruts and bumps.
Dynamic excellence would be worth nothing if the Fiesta turned in a poor performance at the pumps. Its impressive 46.7mpg return was enough for second place in this test, while emissions of 98g/km ensure it is exempt from road tax and the London Congestion Charge. So the leading light of the supermini class shines as brightly as ever in ECOnetic trim.

Chart position: 1WHY: Our favourite supermini is the best eco-tuned option in the class: it’s already seen off Volkswagen’s Polo BlueMotion.