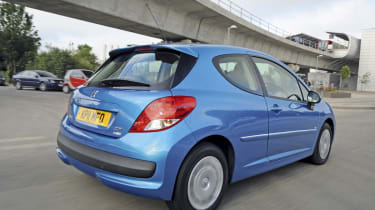 4
The Peugeot 207 is one of the elder statesmen of the supermini sector. It debuted in 2006 and was given a facelift in 2009. But it’s never too late to make improvements, and the pretty French hatch is leading the firm’s switch from Economique to Oxygo badging for its most economical models.
Despite its years, the 207 looks thoroughly modern, and its attractive styling gives it an edge over the more upright Corsa. While the car in our pictures is a three-door example, it shares
its oversized headlights and distinctive gaping grille with the five-door model tested.
The range includes basic Oxygo and higher-spec Oxygo+ models, with the latter benefiting from a leather steering wheel, USB connection and Bluetooth connectivity as standard, giving the interior a contemporary feel. However, the cabin isn’t ageing as well as the exterior.
There’s little wrong with the basic design, but the quality of the materials and switchgear is below what you’ll find in the Fiesta. And it doesn’t feel as well screwed together, either.
Further back, there’s less rear legroom than in the Ford and Vauxhall, and the boot has the same problem. Luggage space of 270 litres trails 25 litres behind the class-leading Fiesta. On the road, the 207 is incredibly easy to drive, with light steering and a lively throttle response. The latter makes the Peugeot feel faster than it is, as even light pressure on the accelerator sees the car move forward with purpose.
There’s an element of noise and rattle from the 1.6-litre diesel, but it is more refined and willing than the smaller 1.3-litre Vauxhall unit, especially during hard acceleration. Around town, the Peugeot’s accurate steering and perky performance suit the car perfectly. However, on more testing roads, it lacks the polish of the Ford. The steering is well weighted but lacks feedback, and the 207 doesn’t have as much grip or agility as the Fiesta. It’s refined on the motorway, though, thanks to its quieter engine.
Unlike its Vauxhall rival, the Peugeot does without stop-start technology. Instead, it achieves its economy and efficiency by virtue of energy-saving tyres, aerodynamic styling and frugal engine technologies. The result is a car that promises to return 74.3mpg on the combined cycle and CO2 emissions of only 98g/km.
It’s a formula that works, as the Peugeot returned the best economy of our trio – 50.1mpg.
So while it’s not quite as sharp to drive as the Fiesta, or as roomy as the Corsa, the 207 is a well equipped, stylish and economical supermini. Its £14,695 price tag also undercuts the Corsa,
so the old-timer of this trio could spring a surprise.

Chart position: 2WHY: The 207 is one of the longest established models on the market, but the low-emissions Oxygo badge is brand new.