Will addition of stop-start be enough to take green baby to top of class? 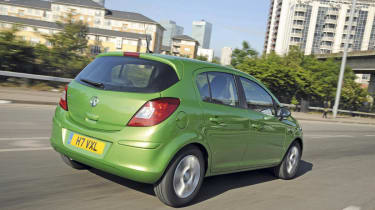 6
Vauxhall’s best-seller was outshone by the Fiesta in the sales charts last year, but the latest round of changes are designed to put it back on the supermini summit.
On the outside, new front bumpers and headlights are the most obvious additions. The subtle differences give the Corsa a more modern and dynamic look than before, and our test car’s striking Lime Green pearlescent paintwork helps it stand out from the crowd, although it does cost £495 extra.
Video: watch CarBuyer's video review of the Vauxhall Corsa
[[{"type":"media","view_mode":"content_narrow","fid":"68662","attributes":{"alt":"","class":"media-image"}}]]
Our Exclusiv model was also fitted with the firm’s optional Plus Pack (£515), which does wonders for the styling. It includes smart 15-inch alloys instead of plastic wheel trims, cruise control, foglights and a trip computer. The cabin has barely been altered, with some new trim and seat fabrics among the biggest changes. That’s no bad thing, as the Corsa has always been a smart and spacious supermini inside.
Buyers can now opt for a fully integrated sat-nav and media connection system as part of the updates – the touchscreen display, Bluetooth connection and USB socket cost a reasonable £750. It gives the cabin a modern feel, and the iPod compatibility and simple mapping are really user-friendly. Some of the buttons are tiny, though, and you need to be precise when pressing them – not easy on bumpy roads.
Rear passengers are treated to the best legroom on test, and the boot provides a well shaped 285-litre load area. Up front, it’s easy to get comfortable behind the wheel, thanks to generous reach adjustment on the steering wheel – the extra audio controls on its spokes are a welcome addition, too. However, there are some low-rent touches, including sharp plastic mouldings on the column stalks.
The Corsa was given an engineering update last year, with improvements to the steering and suspension in particular. As a result, there are few major differences under the skin this time around.
The 1.3-litre CDTi engine was unveiled as part of the revisions, and comes in 74bhp and 94bhp tunes. However, the more powerful motor now features stop-start as standard and costs £505 more than the less punchy unit. The benefits come at the tailpipe – choosing the 94bhp model sees CO2 emissions drop from 105g/km to only 95g/km.
Those figures are impressive, but they come at the expense of refinement. The three-cylinder engine is simply too noisy, even at low speeds, as it rattles away in the background. Push it harder and it becomes even more intrusive. The constant drone is tiring on long motorway trips. After driving the Peugeot and Ford, the extra volume of the Vauxhall comes as quite a shock.
At least performance is up to scratch. At the track, the Corsa proved to be a match for the Fiesta, and even quicker off the mark than the Peugeot – but the noisy powerplant gives the impression that the Vauxhall needs to be worked harder than its rivals from behind the wheel.
The Corsa has the smallest engine capacity here, yet this only became apparent against the clock between 50-70mph in fifth gear. It took 15.1 seconds to complete the test, while the 1.6-litre Ford and Peugeot took 12.6 and 12.8 seconds respectively.
Away from the straight and smooth tarmac of the test track, the Corsa struggles to match its rivals for dynamic appeal. The soft suspension set-up allows too much body roll on twisty roads, yet still thumps into potholes and struggles to maintain its composure over big undulations. As a result, it is neither as comfortable nor as enjoyable as its rivals. Light steering and a notchy gearshift only compound the problem.
These cars live and die by their fuel returns, though, so did the Vauxhall match up to its billing as the cleanest model in our line-up? As the only car fitted with stop-start technology, it should have held the advantage, but its smaller engine needs to be worked hard to keep pace with the Peugeot and Ford, and this showed at the end of our test.
After a final brim, the Corsa had returned a steady 43.9mpg, including our performance testing. This trailed both the Fiesta and 207. So, while the latest revisions have made Vauxhall’s costly supermini a more attractive prospect, it faces a tough job to take the honours here.

Chart position: 3WHY: Vauxhall is hoping to steal a march on its rivals by introducing stop-start technology to the Corsa as part of its facelift.