Can quality and practicality make up for anonymous looks? 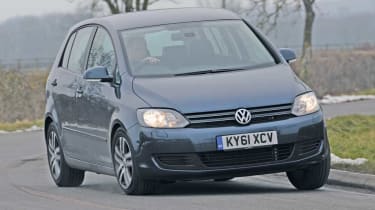 8
It’s an often-overlooked member of the compact MPV class, but the VW Golf Plus is worth considering. By combining all the best bits of the company’s famous family hatchback with an even more spacious and versatile cabin, the big five-door makes a great deal of sense. Yet it doesn’t shout about its talents from the outside.
Unlike its boldly styled rivals, the bland VW doesn’t stand out from the crowd. Dull and unadventurous lines mean it looks very much like a normal Golf to the untrained eye. Even standard 16-inch alloy wheels fail to add glamour to the range-topping SE test car.
This low-key theme continues inside, where it’s clear that VW has chosen function over flair. The upright dashboard has a logical, no-nonsense layout, which sets it apart from the busy Ford and glitzy Mercedes interiors.
There’s nothing wrong with the quality, though. All the switchgear operates precisely, plus the fit and finish is first-rate. Even some hard plastics don’t detract from the overall solid feel of the cabin.
So the Golf Plus’ interior isn’t eye-catching, but a lot of thought has gone into making it both practical and comfortable. A sliding and split-folding rear bench allows you to choose either extra legroom for rear passengers or more luggage space.
Even in its smallest form, the boot holds a useful 395 litres of luggage, while a false floor lifts to reveal extra storage space. There’s also a neat elastic net to stop loose items rolling around.
What’s more, there are plenty of useful cubbies, including hidden trays under the front seats, a lidded box in the centre console and a very large air-conditioned glovebox.
While the VW doesn’t match its rivals for standard kit, you do get all the essentials, such as Bluetooth, air-conditioning and a clever Park Assist system, which automatically slots the car into the tightest of spaces.
The Golf Plus put in a strong performance at the test track, where the punchy 138bhp 2.0-litre TDI diesel engine helped it to match the B-Class for in-gear acceleration and beat the C-MAX in the sprint from 0-60mph.
Like the Ford, our VW was fitted with a twin-clutch gearbox, but this DSG set-up isn’t as smooth or predictable as the PowerShift transmission. It also adds a hefty £1,350 to the VW’s price, as well as increasing its CO2 emissions from 132g/km to 144g/km.
Away from the track, the Golf Plus isn’t as engaging to drive as the C-MAX, but it trumps the more expensive B-Class. The VW’s well weighted steering feels more natural than the Mercedes’, while its softer suspension does a better job of soaking up bumps and potholes.
The Golf Plus also undercuts the B-Class on price. Even if you go for the DSG box, it costs £23,995 – £715 less than the Merc. With a manual box, the saving increases to £2,080. Factor in a £329 three-year pre-paid service pack and it makes the B-Class look expensive.

Chart position: 2WHY: If you’re looking for a solidly upmarket family car, the Golf Plus is worth considering. VW quality and design make it a very sensible choice.