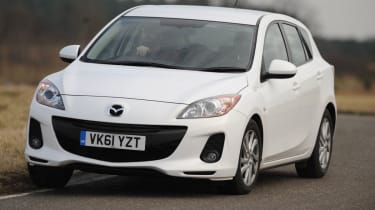 6
With big-hitters such as the Focus and Golf on show, the Mazda 3 is something of an outsider – but it isn’t here to make up the numbers. We’ve always admired the car for the way it drives, and a facelift earlier this year means it fully justifies its place in our line-up.
The 2012 version is more economical than before and costs less, too. In fact, the 1.6D TS2 is the second cheapest car on test, at £18,295.
Advertisement - Article continues below
On the outside, the mildly revised grille and undertray have both been shaped to improve aerodynamics – helping to cut CO2 emissions to 117g/km. The rest of the exterior has barely changed, and the TS2’s new 16-inch twin-spoke alloys are the only other difference. As a result, the Mazda doesn’t appear as modern as its rivals, and the aftermarket-style rear light clusters are beginning to look dated.
Inside, the latest 3 features darker trim on the centre console, silver rings for the audio and climate controls, plus brighter dials. Build quality is decent, but the Mazda loses further ground to its rivals inside as the button-heavy layout and cheap-looking digital read-outs betray its low-cost approach.
The driving position is also set too high for our liking, and there isn’t as much adjustment to the height or reach of the steering column as you get in rivals. Other tell-tale signs of the Mazda’s lower cost are the predominantly hard cabin plastics and absence of a USB connector for digital music players.
Advertisement - Article continues below
Advertisement
Advertisement - Article continues below
That’s a shame, because the 3 is otherwise well equipped, with a heated windscreen, climate control and Bluetooth all fitted as standard. It’s not hugely practical, though.
A 340-litre boot ranks it behind the Golf and Hyundai for load space, and the Mazda has the most cramped back seats on test, with less rear legroom than all of its competitors.
The 3 trails for space, then, but leads the way when it comes to driving fun. New electro-hydraulic steering has made it more responsive than before, and the snappy shift action of the short-throw gearlever is the most rewarding in this class – it owes a lot to the MX-5.
The engine doesn’t disappoint, either. It’s the same 113bhp 1.6-litre diesel as in the Focus, but the lighter and more nimble Mazda is quicker against the clock. It beat the Ford from 0-60mph by nine-tenths, with a time of 11.2 seconds.
On the road, the Mazda has an eagerness that’s missing elsewhere in this test, making it the top choice for keen drivers. But it isn’t flawless, as this dynamic flair comes at a price – noise.
The engine sounds gruff during hard acceleration and there’s plenty of tyre roar at cruising speed. The suspension also delivers a firm ride around town, so while the 3 is fun and affordable it isn’t the last word in comfort, space or refinement.

Chart position: 4WHY: The Mazda 3 is something of an unsung hero in the family car class. Not only is it fun to drive, it’s also competitively priced and promises strong performance.