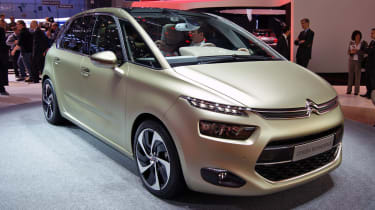 The Citroen Technospace Concept has been unveiled at the Geneva Motor Show, and it previews the production version of the new C4 Picasso MPV.

At 1.83 metres, the Technospace is the same width as the current car, but at 4.43 metres long and 1.61 metres tall, it’s slightly lower and shorter than the existing C4 Picasso. It is the first car from the brand to sit on the modular EMP2 platform, which will go on to underpin a range of new models - including the seven-seat Grand Picasso.

Despite that, Citroen claims that the Technospace boasts “standard-setting interior space and a class-leading boot capacity.” The concept boasts a 537-litre boot, up from the current MPV’s 500-litre load space.

The Technospace Concept is nearly identical to the C4 Picasso prototype car recently spotted in Vigo, Spain where the five-seat C4 Picasso and seven-seat Grand Picasso are being built, including the new car’s bold front-end design.

The back of the Technospace is less dramatic but still has 3D-effect tail-lights. These are incorporated into the tailgate that offers a low loading lip and an integrated rooftop spoiler to improve aerodynamics.

Citroen claims that the Technospace, and thus the forthcoming C4 Picasso are substantially more fuel efficient, with Citroen claiming that the as-yet unspecified engine and new 'PureTech' fuel-saving technology will reduce carbon emissions by as much as 25 per cent across the whole range. The brand also claim that the new car will be the cleanest in its class and the concept car emits a tax-friendly 98g/km of CO2.

The most efficient C4 Picasso in the current range is the e-HDi Airdream, which emits 120g/km of CO2. Expect the Technospace to offer a much better claimed average fuel consumption figure than the Airdream’s 61.4mpg, too.

There are no images of the interior at present, but Citroen says that it features a 12-inch HD panoramic touchscreen as part of a completely new driver interface in what it is calling "a combined product and technology offensive" that will begin in Frankfurt which is where the production version of the C4 Picasso will be revealed.

The new five-seater C4 Picasso will be on sale in the UK by the end of the year while the larger Grand Picasso is due to arrive soon afterwards.