Citroen C5 CrossTourer debuts at Geneva Motor Show, but won't be sold in the UK 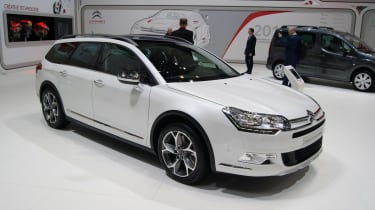 As well as the new C4 Cactus, the Citroen C5 CrossTourer made its debut at the Geneva Motor Show. The new estate model is designed to compete with the likes of the VW Passat Alltrack and the Skoda Octavia Scout – the latest version of the latter also debuting at the Swiss show.

To ensure it has the requisite ‘soft-road’ ability, the CrossTourer has a retuned version of Citroen’s Hydractive III+ oleo-pneumatic suspension, giving the car a number of body heights based on the speed you’re driving at.

In addition to the new suspension and traction control settings, the C5 CrossTourer gets a unique design of 18-inch alloys, subtly extended wheelarches, matt grey roof bars, chrome door mirror caps and a brushed aluminium plate on the front and rear bumpers.

Inside, there are now changes, but the car is pretty well equipped as standard, including a massaging driver’s seat and full leather upholstery.

In France, the C5 CrossTourer is available with the full suite of Citroen’s diesel engines, which range from 115bhp to 200bhp, although the Hydractive III+ suspension isn’t available on the lower-powered HDi 115 and e-HDi 115 Airdream models - they just feature standard suspension raised by 15mm over the standard car.

The car costs from €31,950 in Europe, and is on sale now. At present, there are no plans to sell the C5 CrossTourer in the UK.