We drive retro Citroen E-Mehari buggy, which features a 68bhp electric motor and a 124-mile range 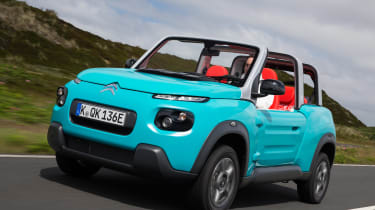 Simple, funny and retro, this pricey Mehari reincarnation shows Citroen’s sense of humour. It’s an ideal holiday hire car as you can return it when you’re done.

Citroen is moving into the future by looking at its past – reviving the Mehari legend as an all-electric, open-top beach buggy.

The newcomer is called the E-Mehari. It’s powered by a 68bhp electric motor giving a 124-mile range; that trails a Tesla by some way, but this car is designed for the quiet life on the coast, so we headed to the German North Sea island of Sylt to take the wheel.

You can see similarities with the original – like grandmother and granddaughter – because the ribbed door pattern and undulating lines of the E-Mehari are a nod to the design of the late sixties Mehari. But the differences are more striking; Citroen’s family face has been grafted on to the front, while the hose-down interior and digital readout on the dash are modern twists. 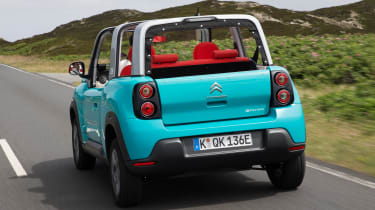 Quirky it may be, but comfortable it is definitely not; despite the long, soft travel of the suspension, bumps and potholes thud through the chassis and into the cabin. The wobbly set-up also means corners are always eventful, as the E-Mehari rolls comically through and out the other side.

Add the instant zip of the electric motor, and there are few driving experiences like that delivered by this car – but that’s probably a good thing. While acceleration begins to tail off after around 35mph, given the manner in which the E-Mehari deals with bumps and corners, you won’t want to be travelling much quicker.

For what it is, the E-Mehari is also frighteningly expensive at 27,000 euros, and that’s before the 87 euros per month you have to pay to hire batteries. There are no plans to sell it in the UK, though.