There's no secret to the Xsara Picasso's sales success - its price. While the Citroen lacks the driver appeal of Ford's Focus C-MAX, the safety of Renault's Scenic or the seven-seat versatility of the Volkswagen Touran and Vauxhall Zafira, the Picasso pulls in the buyers with exceptional value for money. 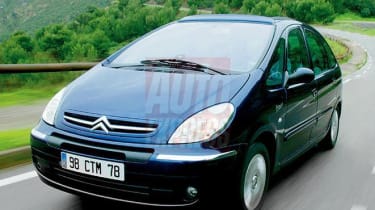 Citroen's Picasso range is now topped off by a new 1.6-litre HDi turbodiesel, which although frugal, is raucous and short-geared. Build quality is still mediocre, but good kit and keen pricing compared to rivals - even allowing for this model's £850 premium over the 90bhp HDi - should ensure continued sales success.

There's no secret to the Xsara Picasso's sales success - its price. While the Citroen lacks the driver appeal of Ford's Focus C-MAX, the safety of Renault's Scenic or the seven-seat versatility of the Volkswagen Touran and Vauxhall Zafira, the Picasso pulls in the buyers with exceptional value for money.

This mild mid-life facelift is not go-ing to change that winning formula, but a new diesel does appear to give the Picasso another string to its bow. Cosmetically, there's a reworked nose and lights, a set of new bumpers and a tweaked grille. Inside, the cabin has Alcantara seat trim for the first time.

Citroen argues that there's no point in change for change's sake. Better to spend its budget on what customers really want - more power. Which is why an advanced new 1.6-litre HDi turbodiesel, developed in conjunction with Ford, sits under the bonnet.

Performance With 110bhp and 240Nm torque - a 20bhp and 45Nm increase in performance over the existing 2.0-litre oil-burner - the MPV now has enough muscle to flatten out inclines and overtake slower traffic without having to drop down a gear. From just above idle to 4,000rpm, there's an elastic-like surge of acceleration which is smooth across the rev range, unlike the peaky delivery of the old HDi unit.

There's no fuel consumption pen-alty for this extra zest, either. Com-pared to the 2.0-litre, combined fuel economy climbs from 51 to 58mpg, while C02 falls from 147 to 131g/km.

But the news is not all good. Given its advanced common-rail fuel injection system, sophisticated variable geo-metry turbo and all-alloy construction, the 1.6 is a surprisingly noisy engine. And although fitted with an 'overboost' feature for an extra dose of power under full acceleration, the new unit never feels particularly punchy.

Shorter than expected gear ratios don't help either, filling the cabin with the engine's high-rev drone at motorway speeds. And until it's fitted with an exhaust filter later this year, the powerplant won't meet Euro IV emission regulations and will be saddled with a three per cent company car tax burden. As the most powerful model, the 110 HDi will top the current Picasso line-up until its C4-derived replacement arrives in late 2006. But we'd argue that the £850 price premium it carries over the existing 90bhp diesel is pretty hard to justify, given its mediocre refinement levels, lack of real punch and unnecessarily short gear ratios. Unless, that is, you can effectively haggle that amount off the asking price at your Citroen dealer.