With a new version of the MPV on the scene, now is a good time to land a bargain on the old model. We look at what’s on offer... 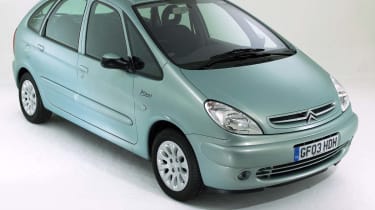 Seemingly endless cashback deals make the Citroen Xsara Picas­so cracking value new – and ensure used examples are cheap. You get space, comfort, refinement and low running costs in an affordable package, and with the arrival of the new model, second-hand prices will take a further tumble. To help you find a good one, our buying guide tells you everything you need to know.

Checklist Instruments: the digital display is prone to throwing tantrums, as is the switchgear, so check everything operates properly. For instance, do the stalks and temperature gauge work correctly? They’re potentially costly to fix, so being thorough could save you money.

Spare wheel: the spare wheel sits in a cradle under the car, and because there’s no security mechanism, it’s a soft target for thieves. Make sure it’s still there and check out www.ospreyproducts.co.uk for a suitable lock.

Engine: the best Picassos come with HDi diesel engines, but these suffer problems with the injection system, as well as the ECU. They can be frustrating to put right, so make sure you take a test drive to check everything is working properly.

Bumpers: some models have parking sensors fitted, but even if your car has them, pay close attention to its bumpers. Judging where the sloping front and rear ends stop is tricky at the best of times, and scrapes are commonplace.

Electrics: clever multiplex wiring system fitted to the Picasso was designed to improve reliability. In reality it’s more problematic than a traditional wiring loom, so check that everything from the central locking to the wipers works as it should.

What to look for Don’t buy the 2.0 HDi, as the 1.6 HDi offers superior power and economy, and it’s worth the extra. There are lots of petrol Picassos available, but they can be slow, so make sure there’s enough performance on tap for your liking before taking the plunge.

Owner comment David King from Bourne, Lincs, is on his second Picasso, and wants another. “Both cars have been 1.6-litre petrol models. They’re well equipped but with relatively little in the way of gadgetry, so there’s nothing to go wrong. I like the driving position and cheap servicing, but wouldn’t mind a little more power. I’ll probably buy a diesel next time, so the depreciation isn’t as savage.”

French cars are renowned for their ride comfort, and the Xsara Picasso certainly doesn’t disappoint in this area. Tidy handling ensures that it’s fairly good to drive, too. The imminent arrival of the new C4 Picasso means values of the old car are due to take a hit. The two models will continue to be sold alongside each other for a while yet, though, and that means getting hold of parts for the older car won’t be a problem. With more than 230,000 Picassos sold to date, you won’t have to look very far to find a decent second-hand example. We like the spacious interior, low purchase and running costs, generous equipment and frugal and refined diesel engines. Watch out for indifferent build quality, unsupportive seats, tired interiors and temperamental electrics