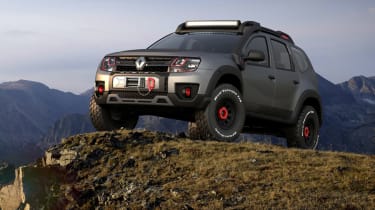 Renault has lifted the lid on a rugged looking off-road version of its Duster at the 2016 Sao Paulo Motor Show. The Duster is badged as a Dacia in the UK and is one of the cheapest new cars on sale in Britain. However, it's sold as a Renault in developing markets around the world, and this particular one has been given an extensive off-road makeover by Renault's Latin American design division.

It sits on top of a set of huge, knobbly BF Goodrich off-road tyres wrapped around black centre locking steel wheels. With the big off-road tyres comes a raised ride height, too.

Tough looking black plastic cladding reinforces the wheel arches, and it gets new bumpers front and rear with skid plates as well. There are tow hooks front and back, and the front bumper gets the addition of a winch. A snorkel exhaust runs up to the roof, where there are red and black roof rails and a mounted LED light bar to match the LED headlights.

It’s finished in a red and grey colour scheme, mirrored on the inside of the car thanks to red accents and inserts dotted around the cabin. Aside from these visual touches, the Duster Extreme’s interior is the same as production model’s.

It’s powered by a 141bhp 2.0-litre fuel flex motor that can run on both ethanol and petrol, which is not available on UK Dacia Duster models.

The Sandero RS Grand Prix is a special edition version Renault’s hottest Sandero, and while it features the same mechanicals and 145bhp, 2.0-litre four-cylinder engine, it gets a paintjob reminiscent of the colour scheme used by the Lotus Renault Formula 1 team. There’s also the Kwid Outsider – a tougher looking version of Renault’s crossover for developing markets.

Should Dacia offer a Duster along the lines of the Extreme concept in the UK? Let us know in the comments... 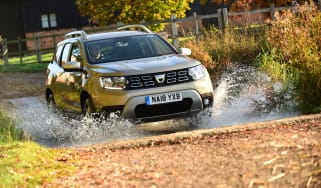 The Dacia Duster is better than ever, and is possibly the best value SUV you can buy
New Dacia Duster Bi-Fuel 2020 review 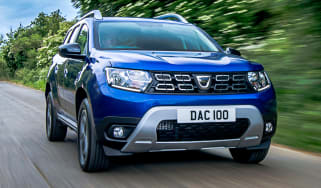 There's a huge range of crossovers and small SUVs on the market today. These are our top ten picks
Dacia Duster vs MG ZS 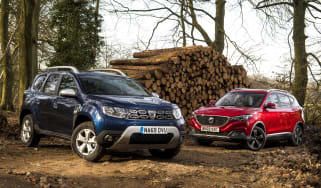