We drive £3,000 Indian-market Kwid that could come to the UK as a Dacia 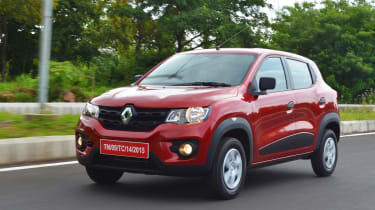 Renault (and Dacia) should have a real hit on their hands with the Kwid. Even if it doubles in price, when it hits Europe, it’ll be impressive value for money. Although this is essentially basic, small transport, there’s a charm to the Kwid that you just don’t expect for a car of this price. European safety standards will see the car strengthened for crash tests, too. We’ll have to wait until we try it in the UK to truly deliver a judgement on its driving dynamics, but first impressions seem good.

With over a billion inhabitants and not a lot of space, India is fast becoming a country obsessed with small cars. It’s a continuing growth market, and Renault has entered the fray with the tiny Kwid - a cheap but versatile city car that could eventually come to the UK as a Dacia.

Renault invested 420 million Euros in the Kwid, with a modern platform sharing elements from the new Kadjar and Talisman. To appeal to the tastes of Indian buyers, the Kwid was designed locally, and it shows.

It’s a smart-looking car that hides its budget pretentions, is just 3.68 metres long and even has 18cm of ground clearance to deal with the poor standard of roads in India. It lacks originality, but the rugged body cladding is protective, and gives it a more imposing stance.

The Kwid gets a 0.8-litre, 57bhp engine which is claimed to deliver as much as 70mpg. It’s not exactly fast, but in a car of this size and weight it’s perfectly adequate. It’s paired with a five-speed manual gearbox, and we’ll see an automatic option next year.

On the road, the chassis feels very rigid and the Kwid handles well – far better than current Indian market small cars such as the Maruti Suzuki Alto. The raised suspension is soft and handles bumps extremely well, although we would have to wait to drive it on comparatively smooth UK roads to see if it’s too soft for our tastes.

Despite the tiny frame, four adults can sit comfortably enough without too much of a squeeze. There’s even a 300-litre boot squeezed in there, which is larger than that found on a Ford Fiesta. Don’t expect to find any soft-touch plastics; the cabin surfaces are hard and coarse, but considering the £3,000 price it’s admirable. 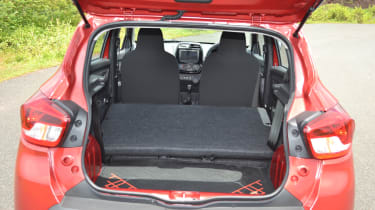 Base models get the bare essentials, but you can specify air-conditioning and even Renault’s MediaNav touchscreen sat-nav and entertainment system. On the dash is a minimalist digital instrument bay, which sounds fancy but actually reduces the build cost. Indian market cars have no passenger airbag, so Renault has taken the opportunity to fit a handy three-in-one glovebox and storage bin. There’s even an opportunity to customise the Kwid, with chrome accessories and decals.

The only question that remains is how Renault can make money on a car like this by selling it for £3,000? If you factor in the cost of labour in India, which is 10 times lower than Europe, then you can assume the Dacia-badged Kwid in Europe will start at just over £5,000. But that’s still serious value, and makes the VW up! look pricey.