Six months. That's crunch time for most relationships. During the early stages of a new romance, everything seems perfect. But as the novelty wears off, you begin to notice your partner's faults. And after half a year with our long-term Daihatsu Copen, I'm now aware of its shortcomings. 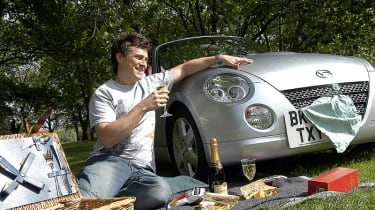 Six months. That's crunch time for most relationships. During the early stages of a new romance, everything seems perfect. But as the novelty wears off, you begin to notice your partner's faults. And after half a year with our long-term Daihatsu Copen, I'm now aware of its shortcomings. When the two-seater arrived, its petite dimensions and cool retro styling bowled me over, and I enjoyed the attention it attracted. A Ferrari driver accidentally mounting the kerb while rubbernecking at the little Japanese motor was particularly satisfying. But after a while, I started to wonder whether the smiles it received were, in fact, smirks. The Copen is not the most masculine of cars. And while its proportions make it ideal for nipping through traffic and parking in tight spaces, they don't command respect from other road users. What's more, sitting so low down, you can't be sure other drivers have spotted you - as another member of the Auto Express team discovered. They were hit from behind by a van while in a traffic jam. The driver was 'unaware' the Copen was in front of him. Fortunately, the only damage was a scratch to the bumper and a cracked light. While I enjoyed the Daihatsu's drop-top action over the summer, there were times I longed for a more conventional vehicle. So I swapped cars for a while. Although our long-term Honda Accord Tourer proved invaluable when I moved flats, it simply didn't get me excited. Our Smart Roadster proved more appealing, though. At first I really enjoyed its racier engine - the Daihatsu's may be turbocharged and rev to 8,000rpm, but at times a food processor can seem more powerful. Also, the German machine's rear-wheel drive and better ride quality make it slightly more re-warding from behind the wheel. However, I be-lieve the Copen is better to own. For starters, its folding hard roof makes the Roadster's targa top look primitive. Additionally, with the lid up the Daihatsu's boot has quite a bit of room, with space for two suitcases or a picnic basket. It's a push to get a sports bag in the Smart's hold. What's more, the Japanese car's steering has better feel, there's a proper manual gearbox and the driving position is far more comfortable. Better still, the Copen has air-con as standard and a leather pack (including heated seats and a Momo steering wheel) available as a no-cost option. On the downside, the interior feels cramped with the roof up, and it's a pain having to carry the stereo's flip-off front whenever you leave the car. Although durable and well put together, the plastics feel low rent. A rattle developed in the roof lining, but this was fixed at the first service at Ingate Motor Co in south-west London, which cost only £73.51. Amazingly, this has been the only problem - apart from the prang. What's more, none of the alloy wheels is scratched, which is incredible considering London's unforgiving kerbs. All in all, life with the Copen hasn't always been a picnic, but it's just a shame that now that I've made up my mind I could happily live with it, the car is going back to Daihatsu. I hope whoever has the little two-seater next enjoys it as much as I have.