I've got a new nickname that I'm not entirely happy about. The rest of the Auto Express team has started calling me Noddy. Why? Well, I'm driving the latest addition to our long-term fleet, the Daihatsu Copen. And to be honest, the little Japanese convertible does look as if it belongs in Toytown. 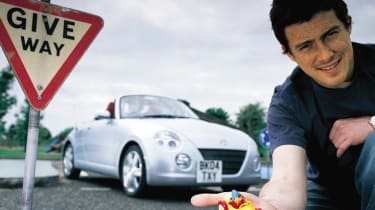 Visually, it's got a touch of 'Honey I shrunk the Audi' about it - from the side it resembles a dinky TT. This similarity, plus the fact that the Copen is as cute as a basket of kittens, means even a simple trip to the shops feels like you're part of a royal procession because of the attention it receives. Everywhere you go people stop and stare - especially when you lower the superb Mercedes SLK-style hard-top at traffic lights. Children smile, women point and men double-take. I'm sure that if onlookers had Daihatsu flags, they'd wave them. But while most people seem to like the car, not all the interest is welcome. I've been laughed at, shouted abuse at and even waved at suggestively - by a man! Some drivers seem more willing to let the Copen pull out at junctions than any other car, but bikers and cyclists have less respect than they would for a normal-sized model. Even pedestrians seem to fancy their chances in a game of chicken. That's because the little Daihatsu is about as butch as John Inman. Yet it has as much personality as Graham Norton, and driving it in town is a hoot. The firm suspension may have drawn criticism from the rest of the office - on rough roads it can feel as if Daihatsu forgot to fit springs - but it will go round any bend without a whiff of body roll. This, plus the quick steering, enables the roadster to change direction faster than a housefly. It's ideal for the daily commute, where slotting through gaps in traffic and diving down shortcuts can mean the difference between arriving on time or 30 minutes late. And the superb handling means in town you can pretty much drive it at a constant 30mph. This is just as well, as the 67bhp 660cc motor isn't the most powerful. Even though the engine is now run in, it isn't that keen to rev - not what you'd expect on a vehicle with an 8,000rpm red line. As it's supposed to be a sports car, the Daihatsu isn't quick, either, with 0-60mph taking 11.7 seconds. On the plus side, the little turbo unit is punchy in the mid-range. And despite its dinky dimensions, the convertible doesn't feel out of its depth on the motorway. The only drawbacks are the tiny fuel tank's paltry 200-mile range and the fact that, with the roof down, the boot is incredibly cramped. Which is a pity as the Copen is best enjoyed open - the cabin is a little dingy with the lid up, although our car's striking red leather seats brighten the interior. They're part of a £500 leather pack also including a Momo steering wheel and chrome gearknob, which is free for the first 1,000 buyers. My only gripe with the driving position is the seatbelt feeders, which snag the harness. Another disappointment is the cheap plastic on the dash and console, while the trim round the stereo is already coming loose - a shame, as the rest of the car has a quality feel that belies its price. On the whole, the first two months with the Copen have been trouble-free and rather fun - apart from the nickname, of course. I just thank my lucky stars that I wasn't sent a yellow one.