You don't have to enter a reality TV show to find out what it feels like to be a minor celebrity - simply drive a Daihatsu Copen down a busy British street and you'll quickly realise that everyone is staring. 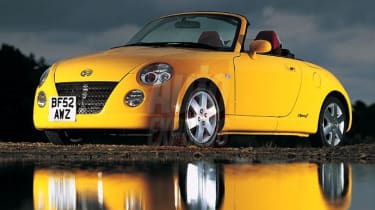 It's difficult not to fall in love with the Copen, but it's equally hard to make a rational case for it as anything other than a second car for those with regular access to something more practical. That said, there are few other vehicles that will turn as many heads.

You don't have to enter a reality TV show to find out what it feels like to be a minor celebrity - simply drive a Daihatsu Copen down a busy British street and you'll quickly realise that everyone is staring.

It's not hard to see why: despite its traditional sports car proportions, the Copen is tiny, nearly a foot shorter than Ford's Ka. Surrounded by normal motors, it looks like an overgrown child's toy. Despite the dinky dimensions, it's set to prove a serious challenger to the Smart Roadster and Ford Streetka, thanks to an electrically powered folding metal hard-top. But what's it like to drive? We grabbed one of the first models in the UK to deliver our verdict.

While the four-cylinder 660cc turbo produces only 63bhp, that's enough to propel the lightweight Copen from 0-60mph in about 10 seconds, and on to a top speed of more than 100mph. The car has a reasonable amount of low-down torque and the unit is happy to rev to its 8,500rpm red line, accompanied by a pleasingly mechanical snarl, although the Japanese-spec gearing (4,300rpm at 70mph in top) will be substituted for taller ratios in UK cars.

The front-wheel-drive handling is secure and stable, with the Copen generating an impressive amount of grip from its small 165/60 R15 Bridgestone Potenza tyres. And while the steering is low-geared, the cabrio enjoys changing direction, the narrow dimensions making it perfect for crowded city streets. The brakes are keen, although the ABS can trigger early on slippery surfaces, while the gearshift offers good weight and works well with a smooth, progressive clutch. The suspension settings are firm, though, and on UK roads there's lots of banging and crashing.

Inside, the cabin feels very Japanese, with old-fashioned shiny black switchgear and hard-feeling dashboard plastics. With the roof up, the interior is cramped for tall drivers, but putting the top down (a painless 15-second process) banishes the claustrophobia.

Sadly, the roof will take up most of the meagre luggage space, as the folded hard-top is stored in the boot. You'd end up wearing very dirty clothes if you tried to take one of these cars on a touring holiday.