Can't wait for the next Toyota Yaris? Then take a test drive in Daihatsu's all-new Sirion. Although the Yaris won't arrive in UK showrooms until September, the Sirion is here now. And with cutting-edge underpinnings from its Toyota cousin, it promises to be Daihatsu's best-ever city car. 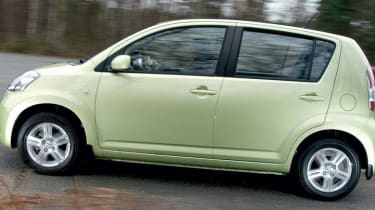 The outgoing Sirion was only an also-ran in the city car market, but its replacement demands to be taken more seriously. With its modern Toyota underpinnings and enormous interior space, the new car is Daihatsu's strongest model. Add the bargain price, and this five-door is hard to beat.

Can't wait for the next Toyota Yaris? Then take a test drive in Daihatsu's all-new Sirion. Although the Yaris won't arrive in UK showrooms until September, the Sirion is here now. And with cutting-edge underpinnings from its Toyota cousin, it promises to be Daihatsu's best-ever city car.

Despite being a similar size to Nissan's Micra, the first thing buyers will notice is that the Sirion looks deceptively big. The lime green paint of our model might not be to all tastes, but the designers have created a distinctive and attractive tall bodyshell. The short nose is ideal when squeezing into tight parking spaces, while the near-vertical rear screen makes the driver's job even easier.

Those with an eye for detail will find even more to enjoy inside. Not only has Daihatsu created a practical cabin with loads of cubbies and cup-holders, but it looks good, too. The centrepiece is a Smart ForTwo-style speedometer, while the rev counter on the 1.3 SE is made into a real design feature with its own separate pod.

Our only complaint with the dash is the quality of some of the plastics - the hard, black trim feels cheap and was already showing signs of wear on our car. However, it's in the rear that the Daihatsu really trumps its rivals, as the amount of space there is truly impressive. The legroom puts most other city cars to shame, and the Sirion is more than capable of carrying three adults in comfort.

The tailgate opens to reveal a sizeable luggage space. With the seats in place, there's a 225-litre capacity, but drop the 60/40 split rear bench and you are left with a completely flat 630-litre load bay. That is more than some large estate cars provide!

On the road, the Sirion does everything buyers are likely to ask of it, but don't expect excitement. Go into corners too fast and there is plenty of body roll, while the steering provides little feedback. The newcomer's handling is more controlled than that of its smaller Charade sibling, though. The Sirion is also more composed travelling at motorway speeds, as the suspension does a good job of smoothing out any uneven surfaces.

The 1.3 variant driven here sprints from 0-60mph in 10.9 seconds, but there's a lot of noise from the engine if you push hard. Most buyers will forgive the lack of refinement after taking into account 48.7mpg fuel economy and CO2 emissions of 137g/km.

At £8,395, the 1.3 SE is great value. Even the £6,995 base model comes with air-conditioning, four electric windows and side airbags as standard. To that list, the top-spec SE adds electric mirrors, alloy wheels and rear parking sensors. It looks like the next Yaris already has a tough new rival to beat this summer...