The fast, flowing gravel stages of Rally Finland are notoriously difficult, but Brit Kris Meeke had the measure of the locals in 2016 to take an historic victory 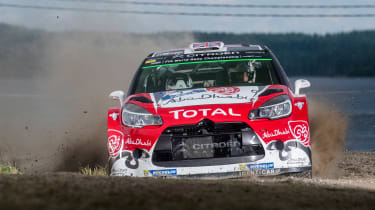 Britain has had two World Rally Champions – Colin McRae and Richard Burns – but even they never managed to win one of the most famous rounds of the series: the legendary 1000 Lakes, otherwise known as Rally Finland. The mix of super-fast gravel roads and blind crests has made the event one of the toughest for non-locals to win.

Northern Irishman Kris Meeke clearly didn’t get the message, though, because in 2016 he scored the UK’s first-ever victory on Rally Finland – at a pace which remains the fastest recorded in any World Championship rally.

Meeke started 2016 as a factory Citroen driver, and was focusing on development of its C3-based challenger ahead of a WRC rules change for 2017. So his season was a part-time affair based on the ageing DS 3 WRC – a proven package, but one widely accepted to be a little off the pace, especially compared with the all-conquering VW Polos.

Nevertheless, the Ulsterman had claimed his second WRC victory in Portugal in the spring – and he arrived at Rally Finland full of confidence. “I’d always had a good pace in Finland,” he recalls. “Maybe it’s just the roads or my style of driving, but I was quick on my first time there with a World Rally Car, and I scored a podium finish in 2014.”

That speed had been interspersed with accidents on the fast Finnish roads, though, and Meeke acknowledges that as he prepared for the 2016 event, one incident in particular was weighing on his mind. “The first proper stage on the opening morning was one called Mokkipera,” he says, “and it begins with about 900 metres of flat-out driving and then a corner where I’d gone off a few years earlier, when the stage was being run in the opposite direction.

“I can remember sitting at the start line that morning, looking down the road ahead, thinking to myself, ‘Well, Kris, what are you going to do? Are you going to play it safe and take that first bend in fourth, or have a go and take it in fifth?’ I kept it pinned in fifth, and got round okay.”

Better than okay; Meeke laid down a marker in that first test, taking two seconds out of hometown hero and pre-event favourite, VW star Jari-Matti Latvala. The two would trade blows throughout the Friday, but with Latvala clipping a bank in the afternoon, Meeke ended the opening leg with a lead of 18 seconds – a considerable margin on a rally where every tenth is hard earned.

And yet the toughest test still loomed, at the top of the schedule for the rally’s second day: Ouninpojha, a 33km behemoth of a rollercoaster ride. Meeke knew that if Latvala was going to fight back, he’d try to do it there.

“I was under no illusion that it was over,” he says. “So Paul Nagle (Meeke’s co-driver) and I got up a bit earlier on the Saturday to look through the video that we recorded during the recce. I was encouraged because even though it’s a famous stage, it was being run in the opposite direction to usual, so everyone had had to make fresh pacenotes. That gave me a chance against the locals. And as I watched the video with Paul that morning, I could remember long stretches of it – lots of landmarks.” 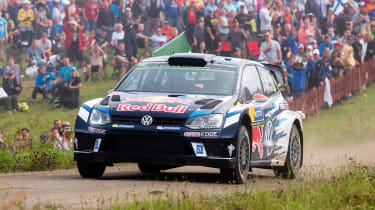 What happened next would decide the event, as Meeke extracted everything from the DS 3 to scalp 13 seconds out of Latvala in 20 miles. The rally was only half driven – but in effect, it was over.

“The scruffiest corner for me of that stage was the very last one,” Meeke remembers, “because I was straining to get to the finish. I knew it felt good and even said to Paul, ‘That’s me laid bare. I can’t do any more than that’. As we pulled up to the time control at the finish line, the reporters were jumping around, and we knew it was good.”

Thereafter, Meeke had the speed and control to manage the gap, and became only the sixth non-Nordic driver to win Rally Finland. His average speed of 126.6kph (78.7mph), remains a WRC record to his day, even though the cars introduced in 2017 are much more potent than that DS 3.

After the finish, Meeke’s entourage descended upon host town Jyvaskyla to celebrate. But while he ultimately joined his crew, Meeke didn’t rush himself. “My overriding memory from that evening is going to my room, and just lying on the bed looking at the ceiling,” he says. “My phone was buzzing with messages asking where I was, but I didn’t answer. Occasionally I would look across and see the winner’s trophy on the bedside table, and smile.

“The only thing better than winning Rally Finland would have been to win the World Rally Championship itself. I never managed that. But I’ll always have the memory of how I felt every time I looked at that trophy.”

What's your favourite rally moment? Let us know in the comments below...