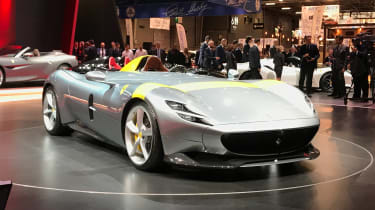 Ferrari has unveiled two new limited edition vehicles at the 2018 Paris Motor Show, called the Monza SP1 and SP2. They are the first models to be launched under the Italian firm’s new ‘Icona’ line-up, which will celebrate some of Ferrari’s most famous models.

Both the SP1 and SP2 are a nod to Ferrari’s racing Barchettas of the 1950s, particularly the 750 Monza and 850 Monza. They will be sold to Ferrari’s most loyal customers at a price believed to be upwards of £3 million. 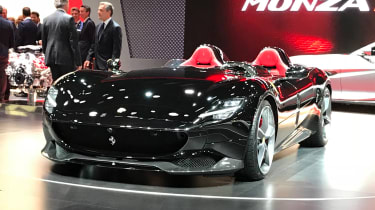 Both examples are road legal; the SP1 is a single-seater while the SP2 does away with the tonneau cover to allow for a passenger seat to be fitted.

The bodywork is made form carbon fibre and completely unique to each model, while the lack of roof or windscreen has allowed for more daring proportions, says Ferrari.

The narrow doors open upwards and the one-piece bonnet is hinged at the front in a nod to the Barchetta racers.

To help with aerodynamics and driver comfort Ferrari has developed a ‘Virtual Wind Shield’, which sits ahead of the steering wheel and manipulates air flow around those inside.

Under the skin both models are based on the 812 Superfast and therefore powered by Ferrari’s most potent V12 engine. The 6.5-litre unit develops 789bhp and 714Nm of torque allowing for a claimed 0-62mph time of 2.9 seconds. Top speed is said to be upwards of 184mph.

What do you think of the new Ferrari Monza models? Let us know below...

Welcome to our Paris Motor Show hub page. Scroll down for all our Paris content...
New 2021 Ferrari Purosangue SUV: design, price and specs

The Ferrari Purosangue will be the Italian firm’s first SUV, with V6, V8 or V12 engines possible
New 2020 Ferrari Roma blasts in as new 612bhp GT