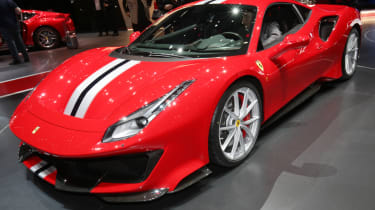 Ferrari has revealed this, the 488 Pista. It’s an apex-hungry, track-focused supercar driven by the most powerful V8 the italian marque has ever made. It also happens to be Ferrari’s showstopper for the 2018 Geneva Motor Show.

The name Pista comes from the Italian word for track, which is exceedingly apt as the 488 Pista uses components developed for the 488 Challenge race car. Parts that have been transferred across include: titanium conrods, Inconel exhaust manifolds, carbon-fibre intake plenums, and modified crankshaft and flywheel – all of which contribute to a 90kg weight saving. 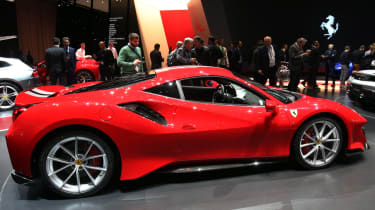 This high-performance diet gives the 488 Pista a dry weight of 1,280kg, roughly the same as an entry level Ford Focus – although don’t hold your breath for any more similarities between the Pista and family hatchbacks.

Just like the powertrain components mentioned above, the Pista’s aerodynamics have been shaped on track. The front and rear diffusers, underbody vortex generators and rear blown spoiler (which is higher and longer than on the 488 GTB) have all been derived from the marque’s racing cars. The result, Ferrari claims, is a 20 per cent gain in downforce compared with the regular 488.

Engineers have also adjusted the 488 Pista’s dynamics and electronic aids, including the introduction of something called the Ferrari Dynamic Enhancer. This system uses software to adjust the brake pressure at the calipers; and Ferrari says it gives the car extra pace and predictability when accelerating through and out of corners. 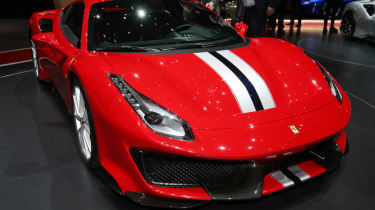 Styling mods include the revised rear spoiler, the aerodynamic S-Duct at the front end and edging on the front and rear bumpers. In keeping with ‘faster Ferraris’ of old (including the 430 Scuderia and 458 Speciale), the 488 Pista gets a set of race stripes running down the centre of the bodywork.

The car sits on new tyres developed specially by Michelin, wrapped around 20-inch carbon-fibre wheel rims. Ferrari has declined to issue a price or an on-sale date, but we’d expect the 488 Pista to cost more than the drop-top 488 Spider, which weighs in at £204,000.

Welcome to our Geneva Motor Show hub page, scroll down for all our Geneva content...
New Ferrari 488 Challenge EVO unveiled 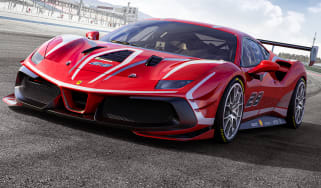 Ferrari has launched a revised version of its 488 one-make racer, with improved aerodynamics and a reworked chassis
New 2020 Ferrari 488 GT3 EVO racer launched 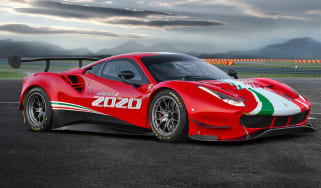 Ferrari has unveiled an updated version of its 488 GT3 racer, with fresh aerodynamics, better ergonomics and improved reliability