Stripped-out Ferrari 599 GTO road racer is the pinnacle of the 599 range, and uses track-inspired technology 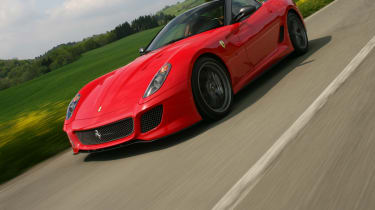 GTO stands for Gran Turismo Omologato, and the letters are reserved for the most extreme roadgoing Ferraris. In fact, there have been just three in the company’s history - the classic 250 GTO from the early sixties, the Group B-spec 288 GTO of the eighties and this 599 GTO, which is a stripped-down version of the 599 GTB Fiorano grand tourer. It uses the same 6.0-litre V12, but it has been tuned to make 661bhp, while extensive use of carbon fibre and other lightweight materials sees weight drop by 100kg over the standard 599 GTB. This stripped-down supercar uses technology honed from the 599XX track car, and gets a complex array of electronics, as well as improved aerodynamics and efficiency. If you’re in the market for an exclusive £300,000 racecar with number plates, not a lot comes close.

The Ferrari 599 GTO takes the standard 599 GTB’s 200mph performance and turns it up to 11. It takes 3.4 seconds to accelerate from 0-62mph – three-tenths of a second quicker than the GTB – and can continue on to a top speed in excess of 208mph. If lap times are more your thing, the 599 GTO can lap Ferrari’s Fiorano test track in 1 minute 24 seconds, which is 2.5 seconds faster than the GTB. Rivals are few and far between at this end of the performance car spectrum, but the 599 GTO is easily faster and sharper than the Lamborghini Murcielago SV. Of course, the payoff for this performance is that it's very difficult to drive gently – you'd only want to drive it if you knew you were going to a track to exploit its full potential.

The £300,000 price tag will buy a decent house, but the 599 GTO is a relative bargain compared to the 250 and 288 GTOs, which command seven and eight-figure sums when they come up for auction. The exclusivity of the GTO badge should ensure that 599 buyers have invested wisely, and they have a collector's item that should rise in value. In terms of economy, the GTO is actually marginally more economical than the standard 599, due lightweight materials and a clever automated manual gearbox. The 599 GTO manages 16.1mpg and 411g/km, compared with 15.9mpg and 415g/km. Consumables are likely to leave a hefty dent in the bank balance, although Ferrari servicing costs are surprisingly reasonable for a prestige brand.

The Ferrari 599 GTB is an elegant looking machine, and the GTO additions only help to enhance an already exciting car – both visually and dynamically. Changes include thinner aluminium and carbon fibre panels, plus lightweight carbon coloured alloy wheels which shroud a set of mighty carbon ceramic brakes. Inside, the car has a pair of figure hugging race seats and matching dashboard trim. The controls are simple but exquisitely finished, and the steering wheel is simply a piece of art. There's a set of F1-style gearshift lights along the top to alert the driver when the rev limit is approaching – as if the sound of the 6.0-litre V12 wasn’t enough.

No one expects a roadgoing racecar to be practical, and the 599 GTO is no exception. It's a trackday special, and this is reflected as much in terms of comfort and space inside the cabin. Saying that, the GTO does get air conditioning and a stereo, so the dashboard isn’t completely bare. The race seats are firm and figure hugging with little cushioning, but aside from this, the 599 GTO is everything you’d expect it to be – a raw, aggressive and involving racer.

With its array of hi-tech electronics and complex safety systems, the 599 GTO could be considered an incredibly safe place to be. It also develops huge mechanical grip, giving supreme confidence in corners, and the electronics constantly adjust the dampers, traction control and stability systems to the conditions, helping to keep the GTO on the road. Obviously all these systems mean the 599 GTO is a more highly-strung machine than the standard car, but don’t mistake this for Ferrari’s of old, the GTO should be as reliable and usable as any other modern-day Prancing Horse.