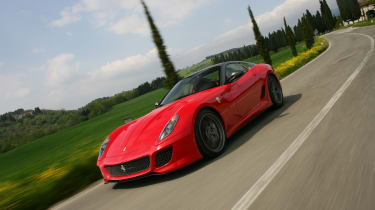 Kerpow! This is a serious road burner and will go down as one of the great front engineed Ferraris, especially as the V12 engine’s days are numbered as emissions regulations take their toll. The electronics keep you safe, but this is really a track car. Insanely fast, shriekingly loud and very grippy, we used to call cars like this ‘Hairy Chested’ now we just say GTO. Shame they’re all sold out…

Car names don’t come much more exciting than Grand Turismo Omologato - a badge used by Ferrari to christen a barely disguised race car for the road.

In fact, so special is the title that the Italian legend has built just two such machines in its entire history, the 1962 250 GTO and the 1984 288 GTO, both of which are now collectors items worth their pared-back weight in gold.

So this third member of the GTO family - based on the 599 - might be regarded as a bargain. Its price tag is a mere £299,300, meaning access to the model's six-litre, 661bhp V12 that little bit more affordable. It's not just the fastest road-going Ferrari, but the most powerful, too.

The secret of this ultimate expression of the front-engined supercar lies with the development of the amazing 599XX, a £1.3 million millionaires’ track day special. Buyers never got to run this car on the road, but the model did offer  a two-year race programme and had its every move tracked by computer.

The result was an electronic mapping system with a chassis set up to steer neutrally, which gives a fast turn to corners and huge mechanical grip. But while this combination offers massive of speed, it comes at the price of mid corner stability.

So engineers use electronics to adjust the GTO’s dampers, traction and stability systems to keep it on the straight and narrow. There are five different grades to this experience: wet weather with everything softened off, Sport or normal mode, Race which hardens the suspension and allows faster gearchanges, CT which gives a bit of tail-out oversteer potential for the track, and CST or ‘everything-off’ for the truly skilled or insanely brave.

Ferrari says the car is fastest in its CT setting, but a professional race driver might just match it in CST.

Let’s hope it works, as you thumb the starter button and savour the engine’s amazing buzz and whirr in the pits at Ferrari’s test track at Fiorano close by the Maranello factory.

As well as thinner aluminium and carbon-fibre panels, the GTO has a stripped-out cockpit in grey apart from red stitching and yellow-backed rev counter. There’s also a separate panel to show the chassis set up with colour coding for the engine, transmission and tyres to show when they are warm enough for the application of full throttle.

Race seats have a firm embrace and there’s basic air conditioning and a radio. The V12 has a six-into-one exhaust manifold and revised intakes for better breathing with a special aerodynamically counterweighted crankshaft, micropolished cam lobes and graphite-printed pistons and slipper coatings for the valve tappets to reduce internal friction by 12 per cent. The result revs harder and faster than the standard 599 GTB and delivers 60bhp more, yet is also more economical and emits less CO2.

With gear changes on the six-speed automated gearbox now down to just 60 milliseconds and 100kg less weight than the standard 599, the GTO tears out of the pits like a scalded cat. Of course it does. But the real test is at the end of the straight with the infamous hairpin that leads into a series of off-camber curves.

Stand on the carbon ceramic brakes and the GTO slows with crashing violence throwing you against the belts. Turn into the bend and the steering defies belief with its speed of response, yet there is no payback with a lurid tail slide. The 4.71m-long coupé charges through bends, constantly telegraphing the limits of grip, although it is a strange experience for those more used to balancing understeer against oversteer.

On the road, the GTO is harsh and noisy, but not unbearably so. You can just about drive it gently without waking the incredible performance, but it is an exercise in self restraint. “This car is mainly for the track,” says the chief engineer, absolutely right, but what a track day tool it is.

Rival: Lamborghini Murcielago 6.5 V12 SV £276,470 Something of a last gasp for this magnificent old stager and its Giotto Bizzarrini-inspired, Paolo Stanzani-designed 663bhp V12 is nearing the limit of development. It also sits across the frame behind the cabin where it shrieks and thrills in equal proportions. With a top speed of over 210mph and 0-60mph in about 3.5sec, this is one of the great supercars.