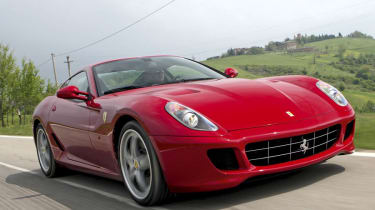 Changes to the 599 range introduced earlier this year mean those who purchase the sensational new 599 HGTE now will not only get this car’s incredible blend of pace and exclusivity, but also benefit from improved economy and emissions. Figures of 15.8mpg and 415g/km aren’t really going to impress green-thinking friends, but you shouldn’t expect to with a supercar. And the HGTE pack makes the 599 a little bit more super than it was before.

Porsche isn’t the only maker launching a go-faster version of one of its top models. Ferrari is set to join the party, too, with the 599 GTB Fiorano HGTE.

While the firm has left the car’s mighty 611bhp Enzo-derived 6.0-litre V12 engine alone, a new suspension pack promises even faster laps around the circuit with which it shares its name.

That might not sound like a significant amount, but the 599 HGTE feels very different to the regular car. The lower ride height and centre of gravity bring with them a new, more intense steering response. And HGTE buyers will notice the difference inside, too. Changes include the introduction of carbon fibre-backed sports seats – complete with Handling GTE stitching on the backrests – and additional carbon fibre trim on the dash.

For a £13,960 premium, the newcomer retains the grand touring appeal of the £190,000-plus standard car, but adds even more thrills.

Rival: Aston Martin DBS sensational to look at and rewarding to drive, the DBS is a fabulous choice. A 6.0-litre V12 ensures it’s as quick as the Ferrari, but it would struggle to keep up on a twisty road.