Learning to drive a supercar

It’s a driving lesson with a difference, as Ferrari experts teach our man how to tame 730bhp F12 Berlinetta 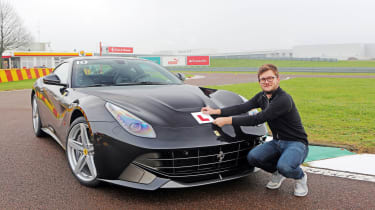 Every Christmas, it’s the same old story: some socks and an orange in my stocking and even the threat of another hand-knitted jumper from Granny. All this time, my only festive wish has been getting the chance to learn to drive a Ferrari, but it’s passed me by every year – replaced by bath bombs and countless chocolate coins instead.

Well, it turns out that I must have been a good boy this year, as I’ve been given my perfect present – a day driving a Ferrari F12 Berlinetta around the Fiorano track in Maranello, the Italian supercar manufacturer’s home. My lesson is part of a course available to all Ferrari owners willing to pay from 7,500 Euros for a full weekend including hotel, transfers and meals. Options range from a few pointers on the track right up to lessons to help get them their race licence. 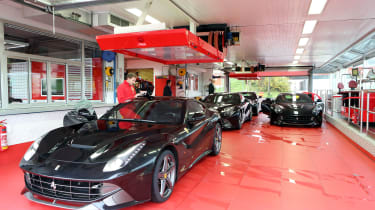 With no experience of driving Ferraris before, let alone on a track, I’ve been struggling to contain my excitement prior to the big day. However, as we arrive in Italy to rain, this has quickly disappeared. As if taking the wheel of one of Ferrari’s fastest road cars on a dry surface wasn’t going to be tough enough, I now have a greasy track to contend with. This makes me more nervous about the whole thing, and all I can think about is how I might put a £240,000 car in a load of gravel or, even worse, into a crash barrier.

That thought only becomes more and more prominent as we begin our briefing for the day and Ferrari officials run through the stats for the car. The 730bhp V12 will power the F12 from 0-62mph in just 3.1 seconds and 0-124mph in eight seconds. Then there’s the fact that this is a front-engined car with all the power sent to the rear wheels, making it one of the more challenging of the prancing horses.

With the scary stats over with, it’s time for Raffaele De Simone, who’s responsible for the development of the test driver team and involved in developing the cars himself, to talk us through the track and how he thinks we should tackle it. His first comment fills me with further dread: “It’s a very technical track. When you try to force and increase your own performance – braking late etc – you’ll actually lose time,” he says. 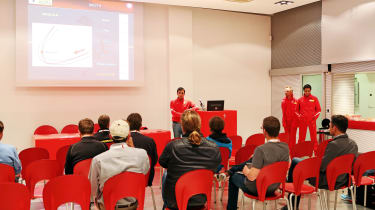 More worrying is that I’m struggling to keep up with everything he’s going through. As he flicks through the corners and what gear we should be in during the presentation, I’ve lost all hope of how I am going to get through this and I’m furiously noting down as much as I can. “As you come out of the corner, you should release the car like a wild horse,” Raffaele suggests.

With the presentation over, we’re ready for our first laps in the F12. First of all, I’m a passenger as Fabrizio Toschi, another development test driver, talks me through the corners and gears. Again, just as I’m figuring out what gear I need to be in for one corner, we’re already on to the next. With eight proper corners sandwiched between some tight, difficult sections, De Simone was right when he said it was technical. For a novice, it’s a baptism of fire. 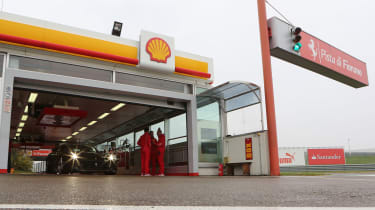 Now it’s my turn. With all the advice on corners, brake positions and gearchanges going through my mind, I’m trying my best to stay calm. As we head down the first part of the track, I’m already confused over what gear I’m meant to be in, before Fabrizio tells me I should be in second. As I tentatively make my way around the track, the other thing that Fabrizio seems to be shouting at me a lot is “brake harder”.

Those first four laps pass in a blur, and I’m not sure I can even remember it for next time. But that could change as I examine the telemetry. Thomas Kemenater is given the job of talking me through the various graphs for things like braking, steering inputs and acceleration to show what went wrong (probably a lot) and what went right (presumably very little).

Before we started, Raffaele set a wet lap target of 1:40.340. The fastest of my four laps comes in at 1:50.950 – a full 10 seconds slower. There are plenty of things to improve on. “You are losing power gradually, not pressing the brake hard enough,” Thomas tells me. “You also never use the full power. Whenever the steering wheel is straight, use the full power.” OK, that’s fairly straightforward – just use all the power and press the brakes hard. Despite the school-like grilling, Thomas is happy with my steering inputs, which closely mirror Raffaele’s. 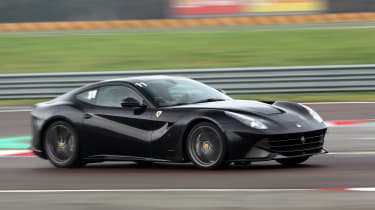 As I hang on to that one positive note and keep reminding myself about braking and using full acceleration, we head out for the second set of laps. Unfortunately, I seem to forget all that I’ve been told. Despite this, things are getting a little easier and I begin to push the car more. It feels like I might have got a decent time on the board, too.

That confidence quickly evaporates, though, as Thomas disappointedly tells me my time has gone up to 1:54.480. “You are leaving big gaps between using the accelerator and braking,” he says. That gap is 80 metres of track where I’m just coasting, clearly having a nice time taking in Fiorano and the F12.

“Instead of progressive acceleration to full throttle, you’re only going up to about 80 per cent,” Thomas reveals. The fact I’m in a 730bhp Ferrari may have something to do with that, as I’m worried about the rear wheels spinning or going too quickly in corners, although with the Manettino switch (which controls suspension, traction and gearbox settings) in Sport mode, this shouldn’t happen. My gearchange is also an issue, as Thomas explains I’m shifting up too early, around 4,500rpm, while Raffaele waits until 8,000rpm. 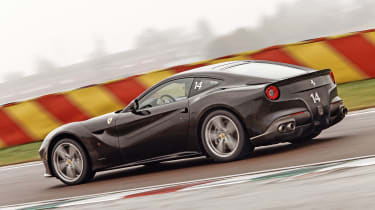 With things going backwards, I seek out Raffaele for some help and advice on what I need to do to get quicker. “Be as smooth and progressive as possible. Do not have sudden inputs,” he suggests. “You should feel heartbeat, feel why we are special. You don’t need to push to feel special.” Before we head out for session three, I change the Manettino switch from Sport to Race, which limits the assistance from the car’s computer.

With all the advice given to me so far ringing in my ears, we get going. I’m feeling confident again, but also wary not to push things too far. While it’s all been fun, this set of laps starts to feel even more enjoyable as things begin to click and I start to remember where certain corners are and what gear I should be in going through them.

Back in the telemetry room, I’ve managed to shave nearly 10 seconds off the second session time and I’m down to 1:45.500. There are still some gaps between the accelerator and braking, while the acceleration is still not quite peaking where Raffaele’s does, but it’s getting closer. Thomas seems pleased, too: “Your acceleration is better, getting to the points that the instructor’s did, but still not progressive enough,” he says. 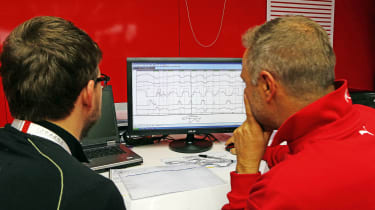 With our final session dawning, I talk myself through all the things I need to get right. As we head off for the first warm-up lap, it feels good. The braking positions are now coming naturally and I’m pushing hard on the brakes to get through the corners quickly. As I hit the third lap of the session, it feels fast, the instructor keeps telling me how good it is and how well I’m using all of the circuit... and then it happens.

I’ve been concerned about the hairpin all day but cautious in my approach. As I get carried away with my progress, I hit it too quick. Suddenly, trying to turn in too late, my arms get crossed and I’m on the run-off area. Desperate not to make a complete mess of the lap, I quickly get on to the track and back up to speed.

Driving back to the pits, I’m annoyed with myself. The first time I really felt comfortable and I get the hairpin wrong. My telemetry and Thomas’ face reveal further disappointment. My time of 1:42.900 is good, but had I managed to get that corner right, Thomas reckons I would have been under 1:40. As if to rub it in, Thomas circles the guilty graph and simply writes ‘DON’T DO THAT!’. Still, having knocked 12 seconds from my worst lap to my best means I’m happy. 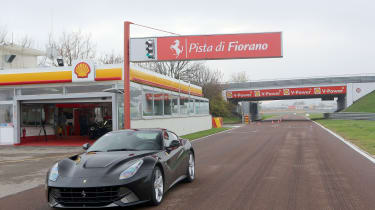 I quickly rush to Raffaele to tell him about my improvement and the incident on the hairpin, but rather than show his disappointment, he simply tells me: “Your first time in a Ferrari, first time on track in a Ferrari – you are Superman.”

Well, Superman may be a bit strong, but I’m still feeling pretty good about myself. Learning to drive a supercar was everything that I hoped it would be. Now I need to decide what to put on next year’s Christmas list.

Kimi Raikkonen shows us how it's done...

My time on the track may have improved my skills, but I’m still an amateur. The same can’t be said of F1 ace Kimi Raikkonen. Having won the title in 2007 and returned to the sport in 2012, the Finn’s a fans’ favourite and he showed us how it’s done with two hot laps of Fiorano.

While our inputs were mostly tentative, Kimi was all-out attack and, although he was going for full sideways action, his talent was clear as he drifted one-handed and hit speeds of 150mph.

Despite a few moments of silence in the car – more down to our awe of him than any real fear – the Iceman turned out to be quite chatty, too, as you can see in our thrilling video...