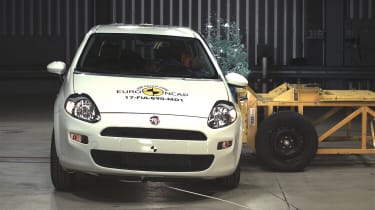 The Fiat Punto has been awarded no stars by independent safety expert Euro NCAP – the first time such a score has been given.

The Punto – first introduced in 2005 – was re-examined as part of Euro NCAP’s regular reassessment of vehicles as the body seeks to find cars “that are past their sell-by-date where safety is concerned”. The Fiat was found to significantly trail its modern contemporaries.

Euro NCAP explained the Punto’s no-star score “came because of low scores for its crash performance, combined with the absence of key technologies such as Autonomous Emergency Braking”. 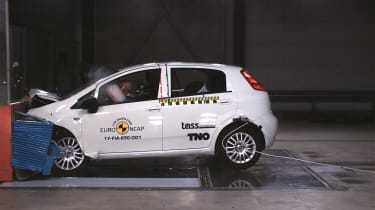 As well as no stars overall, the Punto was given zero per cent in the safety assist category. This too was the first time such a score had been awarded by Euro NCAP.

With a 51 per cent adult occupant score, a 43 per cent child score and a 52 per cent pedestrian safety score, the Punto trails cars like the five-star Volkswagen Polo, which scored 96, 85 and 76 per cent in those respective areas.

Matthew Avery from Thatcham Research, which plays a pivotal role in Euro NCAP assessments, told Auto Express that while the Punto is not a dangerous car: “Given its £11,000 starting price, in terms of pound-per safety, it’s not a good buy.”

Avery went on to say that “things have moved on” since the Punto was first tested in 2005, commenting that as well as “missing fundamental passive safety systems like side airbags” and offering “poor whiplash protection”, the Punto isn’t available with sophisticated active systems such as autonomous emergency braking.

Asked what he thought Fiat should do, Avery said the company should “go back to the drawing board” with the Punto. “Fiat knows how to make five-star vehicles [such as the 500L] and can do better, while cars like the latest SEAT Ibiza demonstrate it’s possible for buyers to combine value for money with safety.”

Back when it was first tested in 2005 and under different test criteria, the Punto (then known as the Grande Punto) scored five stars for the protection it offered adult occupants, and three stars for child passengers. This, Avery told us, “reflects the fact Euro NCAP has moved on, and Fiat hasn’t with the Punto”.

Addressing the Punto's score, a Fiat spokeswoman said: "Safety is of the utmost importance to the FCA group. When Punto was launched 12 years ago, it was the first five-star EURO NCAP car in its class. The importance of safety to the FCA group is demonstrated by the number of new models achieving five stars, for example Alfa Romeo Giulia, Alfa Romeo Stelvio and the Jeep Compass."

Do you own a Fiat Punto? Tell us your thoughts on the news below...