The new VW Polo picks up where the old Polo left off, adding more tech and sophistication to try and outdo the Ford Fiesta 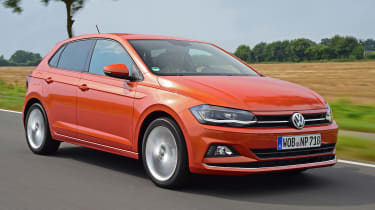 Supermini buyers have yet another model to add to their shortlists, as the VW Polo is up there with the best cars in its class once again. It’s practical, good to drive and has lots of tech on board including the stand-out Active Info Display, a first for any supermini. It’s comfortable too, so if Volkswagen manages to get the price right in the UK the new Polo could even manage to take the top spot in this class from Ford’s brilliant new Fiesta.

VW’s Polo has one of the most recognisable names of the lot, however, and there’s now a brand new car with more space, more kit and an updated design.

It’s hardly a revolution, but the new Polo does have a sportier stance than before thanks to a lower roofline and bumpers and lights that emphasise the car’s width. It’s still one of the more restrained superminis on sale in terms of design, but that understated air has always been one of the Polo’s strengths - it will appeal to those not wishing to shout about their car choice. 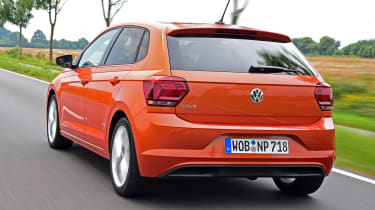 Thanks to the MQB platform the Polo is based on, the car is now lighter, longer and lower than the previous-generation model, there’s more boot space and legroom as well.

On the inside there’s a completely redesigned cabin, which has been updated to allow the inclusion of some larger display screens, which plays into the new Polo’s focus on tech.

It feels upmarket inside, much more so than the new Ford Fiesta - but the SEAT Ibiza, which is also based on the MQB platform, is closer behind. Quality is good, with soft-touch materials and comfortable seats, but there are still a few hard plastic surfaces that look a bit cheap - the Polo is Golf-like, certainly, but you still get a sense of the cost-cutting nessesary in the supermini segment.

A new Active Info Display will be available as an option, which replaces the dials behind the steering wheel with an 11.7-inch screen that can show sat-nav as well as speed, engine revs and all the other information you need. It’s the only supermini to have this feature for now, which is a huge plus point for the Polo. The display is not as crisp or sharp as the version in the VW Golf, and the sat-nav map looks decidedly low-res next to the high-res version on the Polo’s central display screen - but it’s still a great feature to have, and if VW doesn’t charge too much for the option (expect it to be around £400) it will be well worth having.

The large eight-inch touchscreen display on the dashboard is also one of the best in its class, and it will come as standard on all cars in the UK. Its slick graphics and glass finish look great, and it’s responsive to use.

Under the bonnet there’s a pretty wide choice of engines, but from launch there are only 1.0-litre petrol options - two naturally-aspirated versions with 64bhp and 74bhp and one turbocharged TSI unit with 94bhp. Later on there will be a more powerful 114bhp TSI version too, along with a 148bhp 1.5-litre petrol and two 1.6-litre diesels with 79bhp and 94bhp. 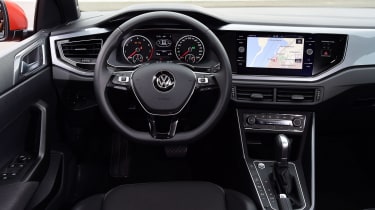 We’re already well-versed in the VW Group’s excellent 1.0-litre petrol range, and the 94bhp one in our test car is as good as ever. It’s pretty economical, returning 62.8mpg, but it’s also going to be cheaper to buy than a diesel and better at doing the short trips superminis are mostly used for.

There’s more than enough power despite the small displacement, and it’s fun to rev thanks to its characterful three-cylinder thrum. The DSG gearbox in our car isn’t the best choice, as while it is a smooth-shifting unit, it’s not very quick - the manual is cheaper and is easy to use.

The five-speed gearbox is just as good as it is in the Polo’s sister car, the Ibiza - it’s a light, positive shift that makes using the engine good fun. The whole powertrain feels a bit more grown up than the Fiesta’s, but it’s not a huge lead as the engine in the huge-selling Ford is a bit more lively and fun to use.

It’s a similar story when it comes to driving dynamics - the Ford is fantastic fun, with a chassis that combines agility, grip and ride quality admirably. The Polo also follows that formula, and while it’s hard to tell if the Polo will be more comfortable than the Fiesta in Britain, it rode very smoothly on our German test route, even through some harsh potholes.

Our car came with the Sport Select option, which adds adjustable dampers to the parameters of the selectable driving modes. Sport mode firms things up a bit to reduce body roll, and while it’s still not as fun as the Fiesta, the Polo is good to drive. There’s not much steering feel and it’s a bit too light, but the Polo’s traditional strong balance of ride and handling has stayed intact for this new model. 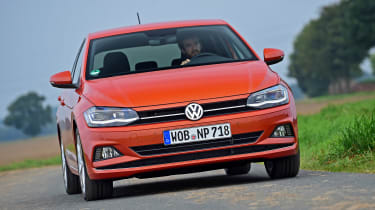 As it’s bigger than before, there’s more legroom in the back - although it’s not as spacious as a Suzuki Baleno or Honda Jazz, it’s big enough and definitely a match for its closest rivals, the Fiesta and Ibiza. The boot is 71 litres bigger than before, at 351 litres, which is more than the 292 litres in both the Fiesta and the Ibiza. It’s nearly as much as in the 355-litre Baleno and 354-litre Jazz.

The Polo has always been one of the more expensive superminis around, and we don’t expect that to change much with this new model, either. It’s now a five-door only, which will increase the entry price for the whole range, and there’s more kit on these new models as standard so that’s also going to inflate the price a bit. It’s this that will ultimately decide the Polo’s fate in the UK - it won’t be easy for the it to beat the excellent-value Ford Fiesta if it’s too expensive.