Las Vegas show displays the best of the aftermarket, and Ford’s set the ball rolling with four crazy custom pick-ups 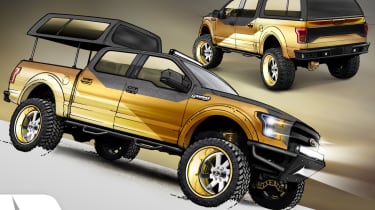 The SEMA show is the car modder’s event of the year – showcasing the very best that the automotive aftermarket has to offer. More recently, though, it’s becoming a place for companies to get extra publicity with awesome custom vehicles – which is exactly what Ford is doing this year, bringing over 50 vehicles to the show in Las Vegas’ international convention centre. The company has begun to show off what it’s bringing, too, and has unveiled four custom pickup trucks built by different customisation companies.

All four trucks are based on the F-150 pick-up – the best-selling vehicle in America – but from there on they go in very different directions. The first is the EraThr3 F-150, built by Hulst Customs. With its massive, intricate 26-inch rims and lowered air suspension, it’s definitely for showing off on the road rather than tackling the Nevada dunes, but that hasn’t stopped Hulst from beefing up the 5.0-litre V8 with a series of performance upgrades. 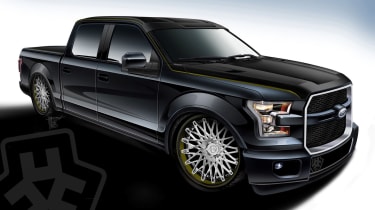 A Whipple supercharger and performance exhaust both feature and help to bring the F-150’s power output to a whopping 750bhp, while inside there is a custom leather interior.

From on-road to about as far off-road as you can get, Bojix Design has turned a 3.5-litre V6 F-150 model into the ultimate 4x4. It’s benefitted from a seven-inch lift and underbody cladding to protect the underside. Don’t worry, though – there are motorised steps to help you get up into the higher cab. 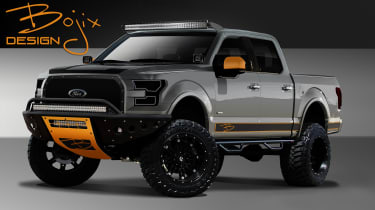 Under the hood, the twin-turbocharged EcoBoost engine has received a full Race intake system and upgrades to both turbochargers.

Still in the drawing stage, A.R.E. Accessories Gold Standard Project Truck shows off ‘medal-worthy’ products. It too is an EcoBoost V6 Model, and has a new intake and exhaust on it to improve performance. ‘Skyjacker’ suspension and a load lifter should aid loading the truck bed, while it rides on custom 24-inch wheels.

There’s a list of products as long as your arm decking out the exterior and interior – some from Ford and some further afield. 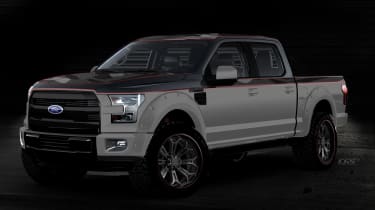 And finally, one for the cyclists – the F-150 Lariat SuperCrew, which is inspired by BMX bikes. To that end, it features a host of bike-friendly equipment, including Ssquared Bicycles bike frames, helmets, gear bags, GoPro action cameras and a full complement of spare parts.

The SEMA show takes place in early November, and we’ll bring you more details from the show as we get them.

Would you consider customising your car to this level? Let us know in the comments below...