Look inspired by 1966 Le Mans winner for new limited run Ford GT, before supercar goes out of production in 2022 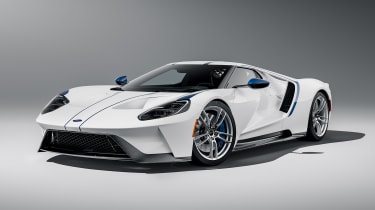 Ford has revealed a special edition version of the GT supercar to commemorate the 55th anniversary of the company’s famous win at the 1966 24 Hours of Le Mans race.

Inside, the GT Heritage Edition’s instrument binnacle, headliner and steering wheel have all been trimmed in black Alcantara, and there’s a fresh pair of anodised red paddle shifters mounted on the steering column. The supercar’s sports seats have also been trimmed in red Alcantara and there’s a unique ghosted race number on each of the car’s doors cards.

Buyers can also build on the specification of the special edition GT with Ford’s Heritage Upgrade Package, which adds black Brembo brake calipers and swaps the car’s standard alloy wheels for a set of 20-inch carbon fibre replacements.

The GT Heritage Edition is powered by the same twin-turbocharged 3.5-litre V6 engine as the recently improved standard supercar. The powertrain develops 651bhp and sends drive to the rear wheels via a seven-speed dual-clutch gearbox.

Production of the Ford GT Heritage Edition will be limited to just 50 examples worldwide, which means no more than nine units will make it to the UK.

However, Ford has already allocated all 1,150 GTs due for production between now and 2022. So, providing your name is already in the company’s order book – and your application has been approved – you can get in touch with Ford to spec the Heritage Edition package for an additional fee. Ford is yet to confirm the commemorative model’s pricing, though. First deliveries expected to arrive in early 2021, before Ford pulls the supercar from the market in 2022.

Ford has also released a new graphics package, which was collaboratively designed with Multimatic, the company which handles the GT’s production. The livery highlights the supercar’s key styling elements – such as its cooling ducts, buttresses and aero channels – and will be applied to just 40 GTs between now and the model’s production end in 2022.

Check out some of our favourite motorsport moments here...