Stunning new Ford GT supercar is devastating on the track, but compromised on the road

The brand new Ford GT is sensational to drive on a circuit, boasting as much drama and speed as you’ll ever encounter from a car that’s licensed for use on the road. Designed in secret from a pure-bred Le Mans racer, it’s composed, brutal and exciting – but it’s not as refined as it could (or should) be on the road. Despite such reservations, though, you can’t help but fall in love with the latest GT. Its looks and engine are more than enough to win you over – even if ultimately it’s little more than a road-legal Le Mans car at heart.

The all-new, £450,000, 216mph Ford GT very nearly didn’t happen. That’s because, to begin with, the manufacturer was planning to build a front-engined Mustang, not a mid-engined GT.

How so? Well, back in 2013, Ford hatched its plan to return to the Le Mans 24 Hours as a factory team three years later, in order to celebrate 50 years since its now-famous GT40 victory at the legendary race in 1966. And at the time, the Mustang was the car the company most wanted to promote.

Trouble was, that car proved to be difficult, if not impossible, to engineer into a competitive racing car while still being identifiable as a ’Stang. So, after a year of trying to make it work, the manufacturer ditched the idea, and that was that. 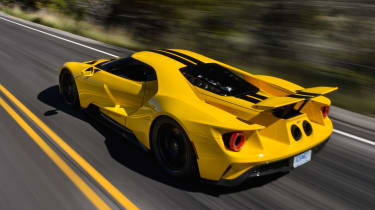 Except that the team which had been responsible for the terminated Mustang Le Mans project then formed a top-secret plan of its own; to build an all-new GT on the quiet, with neither the permission nor knowledge of the manufacturer’s bosses. The plan was to slowly turn that very model into a full-blown racer instead.

At the same time, they also built a clandestine road car in tandem with the racer. And at 2015’s North American Auto Show in Detroit, having finally been green-lighted by the board, the all-new Ford GT was unveiled. At this point, the world of lightweight, super-exclusive supercars went into meltdown – understandably so, given how knee-tremblingly beautiful this car is from every angle.

This also explains why, fundamentally, the new Ford GT is really a racing car at heart. At its core sits a full carbon-fibre tub with in-board pushrod suspension at both ends. The seven-speed dual-clutch gearbox is integrated into the rear suspension, just as it is in any serious mid-engined racing car, and the engine itself is a 3.5-litre twin-turbo V6 with a pure competition background. It produces 638bhp at 6,250rpm and 747Nm of torque at 5,900rpm. All in, the GT weighs less than 1,400kg without fluids or a driver.

The brakes feature massive carbon-ceramic discs at each corner, and as you’d expect it’s as slippery as they come through the air. In fact, parked next to a Ferrari or McLaren, the tiny frontal area makes even those cars look bulky. The GT also features a computer-controlled aerodynamic package that, Ford claims, provides less drag and more downforce than just about any other rival at this price. Plus it has an airbrake that deploys during big stops, which is again computer controlled to provide assistance – but only when it’s genuinely needed. 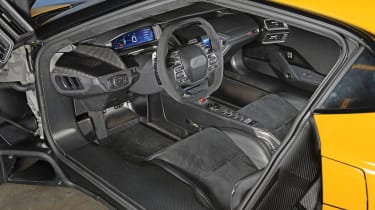 In total a mere 1,000 GTs will be built over the next three years, and only around 40 will find homes in the UK. As you can imagine the buying criteria is suitably strict, designed to reward loyalty to the brand, and to the GT specifically.

An application process was launched last year for those inclined to purchase a car, but with so few available Ford had to choose buyers very carefully. For instance, if you bought one of the last-generation GTs but have since sold it, there will be no new car for you; that’s how exacting Ford is being with model allocation. And in a way, you can understand why; it doesn’t want speculators to purchase this car. It wants the new GT to be bought, driven and enjoyed in public, and for it to be gawped at by as many people as possible. This is no garage queen, and rightly so.

In that case, what’s the all-new Ford like to drive? Utterly wonderful in most respects, but with a couple of caveats about its on-road performance that might well surprise you, because they did us. Remember, after all, this is a road car designed around a hardcore racer.

You climb in via a semi-dihedral door. Because the car’s so low, you basically aim your legs towards the footwell and your backside at the seat. Hoping for the best, you simply tumble into the cabin.

The fixed seat base is integrated into the tub, so to get comfortable you need to move the pedals and wheel towards you, as in a LaFerrari. However, the GT’s seat back moves as well, meaning anyone of any size can get comfortable behind the big, square-edged steering wheel, which is, of course, festooned with buttons (we counted 16 in total). The cabin is noticeably tight, however, meaning claustrophobic customers might find it a difficult place in which to spend time.

The GT has five drive modes, ranging from Wet to V-Max, with Normal, Sport and Track in between. To begin with, Ford’s engineers suggest we try Sport. We’re at a track just outside Salt Lake City, USA, and have only six laps to get to know this car before embarking on a longer road drive. This is not a time for messing about – not when you’ve got more than 600bhp under your right foot and a £450,000 sticker price above your head. 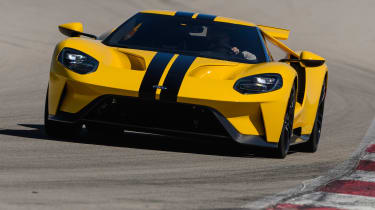 Thumb the starter button and an almighty noise emanates from behind the driver’s seat. Pulling the right-hand gearbox paddle towards us sees a big number ‘1’ appear within the digital dashboard, and by simply releasing the brake pedal (heavy, meaty underfoot) we’re away; simple as that.

The ride is firm but beautifully damped as we rumble out of the pitlane and on to the circuit. But it’s the noise, and the subsequent eruption of acceleration that occurs when you select second, third and fourth, that are the dominant sensations.

The steering is heavy-ish but ultra direct, and although there’s a slight amount of body roll upon turn-in, the chassis is fantastic. There’s loads of grip and bite from both ends, giving an extraordinary amount of control. Understeer is entirely absent to begin with, and the way the GT stops is just ridiculous. As is the way it goes, in fact – as we soon discover when we finally open it up properly down the back straight. Jeepers creepers, it goes hard, and very, very fast. 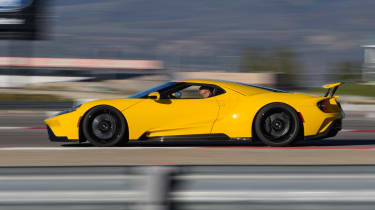 The GT’s straight-line acceleration is right up there with the very quickest cars on sale today. With a 0-60mph time of 2.8 seconds and a 216mph top speed, it’s on par with the recently updated Lamborghini Aventador S. It’s perhaps not quite as bombastic as the (less expensive) McLaren 720S, but it’s still massively fast by most other standards. However, the noise it makes, plus the sheer grip it develops, is utterly incredible. In these specific respects there is nothing else out there like the Ford GT. Not at any price.

After three laps we come back into the pits and engage Track mode, which drops the ride height by 50mm in one single, dramatic, quarter-second thump. It hunkers down and, perhaps surprisingly, looks even meaner and more aggressive than it does normally. Heading back to the circuit is an eye-opening experience, too, as we discover a car that has even more control and less body roll (the stiffness goes up by a staggering 100 per cent in Track mode) than before. 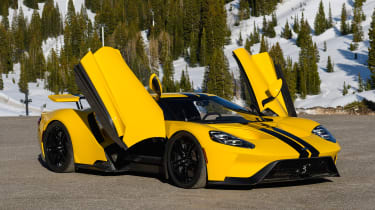 It now stops, steers and changes gear with even greater precision. But herein lies the problem. As a track machine the new Ford GT is almost certainly a full-bodied, five-star car. Yet as we pull away from the circuit and on to the Utah tarmac, the GT feels and sounds curiously unrefined for a £400k-plus supercar. It rides quite well if you select Comfort on the electronic dampers, but at the same time it feels too wide, too big, too cumbersome, and it’s simply too noisy to be properly usable on the public road. That’s a problem because, as we discussed, Ford wants these cars to be driven, not squirrelled away for a sunny day.

The GT also has the most pathetic boot we’ve ever seen – all 11.3 litres of it. It’s barely enough for a small bag, and given the cramped cabin, you won’t want to place much more inside there, either. Even an Aventador manages a respectable 140 litres in its nose, while a 720S claims more than twice that. Plus, the GT’s sub-150-mile real-world fuel range (despite a 57.5-litre tank) means you’ll be on first-name terms with your local petrol station cashier. We managed 15-17mpg on test, which even given the Ford’s focus as a race-prepped car for the road, is pretty disappointing.