The McLaren 720S may be one of the best supercars ever, and its serious performance comes with a fun factor too 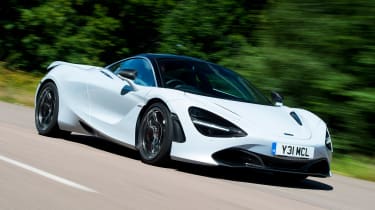 The 720S is an exquisite machine, with balance and power brilliantly matched, making the extraordinary performance on offer incredibly usable in ordinary driving. With every successive generation McLaren is refining its road cars, addressing flaws and elevating their strengths to stratospheric levels. The 720S is one of the most capable cars on sale and an emphatic declaration from McLaren. It’s a performance car with a serious side, but in the right circumstances the fun factor shines through.

McLaren insiders might not explicitly admit as much, but the firm’s new 720S is near-as-dammit as quick as its P1 hybrid hypercar around a tighter, twistier circuit. That’s progress for you.

Thank a raft of developments over its predecessor, the 650S, for that. The 720S is McLaren’s second-generation Super Series model – the middle rung of the firm’s three-tier line-up, sitting between the Sports Series and Ultimate Series (the second of those is a space occupied by the P1).

• Best supercars in the world

For the 720S there’s a new Monocage II carbonfibre chassis and McLaren’s next-generation Proactive Chassis Control II system. The twin-turbo V8 engine has been enlarged to 4.0 litres, is made of 41 per cent new components and produces 710bhp and 770Nm of torque. Thanks to its carbonfibre core, the car only tips the scales at 1,283kg dry, which means it has massive performance potential. 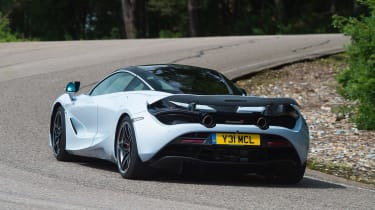 Launch control helps it hit 62mph from rest in 2.9 seconds; another 4.9 seconds later it will have doubled its speed, which is an incredible statistic. However, while the raw numbers are incredibly impressive, there’s so much more to how the 720S yields its performance than the figures suggest.

This is a Super Series car, so on the road the focus is obvious, but the comfort on offer in the chassis’ Normal setting rivals that of some GT cars. It doesn’t exactly float over the road, but it flows over bumps without fuss and with a taut but composed and controlled feel to the ride.

Ramping things up, by engaging McLaren’s Active Dynamics Panel to independently select different modes for the chassis and powertrain, increases that focus. The adaptive dampers are more rigid in the Sport setting, while in Track the damping is still plush, offering incredible control, but it rules body and wheel movement with iron discipline. It’s helped by the interconnected hydraulic suspension that takes the place of a conventional roll bar to keep the car flat and level through corners, squeezing colossal grip out of the tyres.

Point the 720’s unusually styled nose (those headlight cavities help cooling) and you’ll find that the steering is fantastic. As with all McLarens, it’s electro-hydraulically assisted, and offers lovely, detailed feel.

The 720S has so much ability it will scythe through any bend at incredible speed, faster than you might initially think possible. It’s the precision and level of involvement it does it with, connecting you with the road surface, the chassis and the tyres - and the clarity with which it highlights the processes going on that make it such a delight to exploit.

Let the engine rev out through third gear on full throttle and the 720S is rabidly, manically fast, the motor gathering momentum as the revs rise where most turbo units tend to tail off. It’s still not as linear as a Ferrari 488 GTB’s turbocharged V8, but the twin-scroll turbos help keep lag to a minimum, and throttle response is relatively sharp. 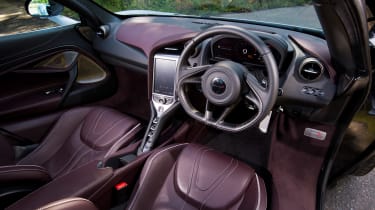 The engine note still isn’t the most characterful, and next to a Lamborghini Huracan Performate’s naturally aspirated V10 it sounds a little flat, with whooshes and chatters from the turbos overlaying the V8’s buzzy blare. However, the brakes are a match for the motor, halting the car with neck-cricking force, while the 720S boasts a brilliant gearbox.

It shifts rapidly in manual mode and changes smoothly in auto. There’s none of the jerkiness you sometimes get in other McLarens, while the brake steer system that replaces a limited-slip differential is the most natural-feeling iteration of the technology yet.

McLaren has also introduced a new Variable Drift Control feature to try and unlock a little more entertainment and show its lighter side. The system lets you choose how much angle you want in a slide through the upgraded infotainment system, but while it’s a clever feature that’ll let you play the hero and intervene to stop you from spinning, if you’re confident it’s easy to access the chassis’ delectable balance with everything off. 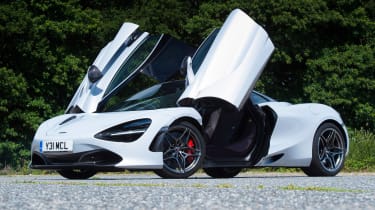 The practicalities of owning a supercar might take a back seat compared to performance, but nonetheless, the 720 is more usable. The new dihedral doors that cut into the roof make entry and exit easy, and visibility is still great, both forward and rearward.

Your eye is drawn by the beautifully finished details such as the exposed carbon A pillars, and the cabin is finished with the attention to detail you’d expect, with bespoke switchgear and a revised layout over the 650S. The new TFT dash is a step on, too. It displays all the info you need in Normal and Sport modes, and folds away revealing a smaller screen showing the bare essentials in Track.

The new infotainment system is much better, too. It responds faster, the screen is clearer and the way things work seems that little bit more logical than in McLaren’s 570 range. A 150-litre luggage bay in the nose and an extra 210 litres behind the rear seats gives more than enough space for weekend bags.

The final important figure is as significant as the others - because at £208,600, the 720S is a serious chunk of money. But then, this is a serious performance car that McLaren has worked hard at to tease more fun from. 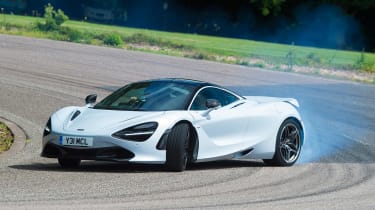 Click on the gallery above to see more of the new McLaren 720S...