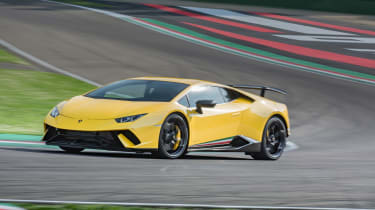 If you’re after a more focused supercar, the Lamborghini Huracan Performante elevates the standard car’s game to the next level – and it’s this that earns it the extra star. Obviously it’s faster thanks to the new tech, but more importantly it inspires confidence in a way that existing car can’t. Granted, it’s nearly twice the price of a Porsche 911 GT3, but for some, the Porsche won’t be able to match the sense of occasion that the Lamborghini delivers in bulk, with only a small compromise when it comes to usability.

The standard Lamborghini Huracan doesn’t exactly lack theatre, but in the presence of the Huracan Performante the regular V10-engined car looks tame.

That’s because this £207,925 Performante version is sporting myriad tweaks over the standard car to improve its performance everywhere. According to Lamborghini’s board member for Research and Development Maurizio Reggiani, there are four key pillars that underpin the Performante’s upgrades.

The first is lightweight material, and it’s dotted throughout the car. The new front spoiler, rear wing, engine cover and rear diffuser are all made of forged composites. The finish looks a little like a kitchen worktop, but it’s actually chopped carbon fibres embedded in a matrix of resins. These parts help save 40kg over the standard car. 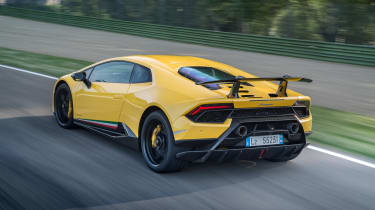 The second pillar is the V10 motor. While many performance cars are turning to turbocharging, Lamborghini is sticking with its naturally aspirated 5.2-litre unit, and thanks to a new intake manifold, a revised exhaust and new titanium valves allowing more lift, power is up to 631bhp (from 602bhp) while torque stands at 600Nm (the standard cars produces 560Nm). The motor is glorious, but more on that in a moment.

So, what’s the Performante like to drive? Ferociously fast and surprisingly physical, actually. The first thing you notice is that engine. It might not be turbocharged, but 70 per cent of the torque is available from just 1,000rpm, so the Huracan pulls hard from low down, and revs incredibly hard to beyond 8,000rpm. The noise it makes is phenomenal, too; it’s a full-on blare that sounds almost identical to the Huracan GT3 racer.

It’s a joy to rev it out. Flick the right paddle and it all starts again as the recalibrated seven-speed dual-clutch automatic gearbox handles the change swiftly. It’s smooth in the most part, too, but every now and again the box will thump a change home going up and miss a shift coming down.

It doesn’t detract from the experience though, as the chassis evolutions deliver an incredible level of grip. We tried Lamborghini’s Direct Steering setup that has come in for criticism on other Huracans, but it’s better here. It’s still not full of feel, but it’s more predictable, especially in Corsa mode where the speed of the steering matches the alert chassis nicely.

The front axle has plenty of bite and thanks to the weight reduction the lighter Lamborghini responds to direction changes faster. You can feel the lack of inertia compared to its more portly sibling, as the Performante feels more agile. It gives you messages to push harder and harder, filling you with confidence to lean on the four-wheel drive system’s impressive traction. 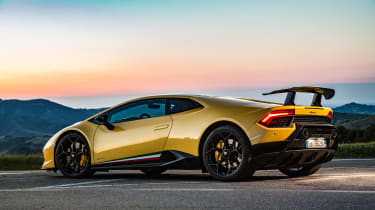 The way it delivers its performance feels brutal. It doesn’t flow like a Porsche 911 GT3 and nor does it have the same sense of balance. It’s as if the Performante’s chassis bullies its performance out of the tyres, but there’s no doubt it’s fast, fun and devastatingly effective.

Some of that stems from the active aerodynamics – the Lamborghini’s fourth upgraded performance pillar. Called ALA (which stands for Aerodinamica Lamborghini Attiva), the system uses a flap in the front spoiler and flaps in the engine cover. In Corsa mode, the car determines when to open and close these to give maximum downforce or the lowest drag to improve acceleration and top speed. There’s also an aero vectoring mode that adds downforce to one side of the car in corners to give more grip and therefore reduce the amount of steering input needed.

Can you feel the active aero working? Well, the Performante is definitely more stable in high-speed corners and on the brakes, but that’s no surprise given it makes 750 per cent more downforce than the Huracan it’s based on. 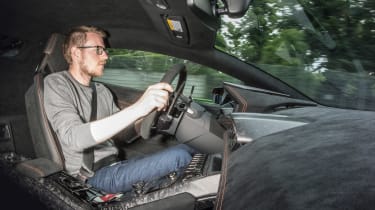 These numbers are all very serious, but there’s still a playful side to the car. The Performante moves around on the brakes a little, while the stability systems even in Corsa let the Lamborghini gently rotate it’s tail on the way into and the way out of bends.

Efficiency, if you need to know, stands at 20.6mpg and 314g/km CO2, while there’s also a 100-litre boot in the nose that’ll swallow two squashy bags.

Its usability extends to more than a bit of boot space, though. On the road the Performante rides with real composure. It’ll come as no surprise that it’s firm, but it doesn’t crash and only at low speed does it feel a bit lumpy. Up the pace and the car works with more fluidity, riding bumps and corrugations with more finesse.