A rear wheel-drive Lamborghini might not be to everyone's taste, but in reality the Lamborghini Huracan LP 580-2 is the sweetest Huracan of all to drive. And it’s £50k cheaper than the Spyder. Warts and all, we absolutely love it.

As a commercial prospect, the rear-drive Lamborghini Huracan – known in full as the LP 580-2 – was never likely to be much of a success. Lamborghinis, after all, are all supposed to be four wheel-drive because this, say Lamborghini’s engineers, is the optimum configuration for generating maximum performance. So the idea of a rear drive Huracan is, by admission, something of a flawed design. To a point where you wonder why they even bothered to ditch the front driveshafts and detune the V10 engine by 30bhp.

And yet, in reality the LP 580-2 could just be the sweetest Huracan of the lot. For starters it’s lighter than any other Lamborghini, and that’s always a good platform on which to build a supercar. It’s steering and suspension have also been tweaked to make the handling that little bit crisper on the move. And in the case of the test car you see here, the seats are also sportier in both feel and look compared with those of other Huracans. 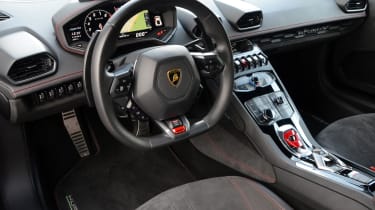 Plus, the LP 580-2 is also cheaper than any other Huracan – by almost 50 grand compared with the Spyder convertible. So in more ways than one the LP 580-2 defies common logic and proves, at the same time, that if you set a mid-engined car up properly in the first place then it doesn’t really need all-wheel-drive. Witness what they do at McLaren, none of whose cars, not even the 904bhp P1 hypercar, are four wheel-drive.

On the move, the LP 580-2 feels alert and alive in a way that no other Huracan quite manages to replicate, without ever feeling edgy or nervous. If anything, and given how small the market is likely to be for such a car, Lamborghini could have gone a step further with the chassis and made the 580-2 even sharper, even more focused. But at £156,575 it’s still the bargain of the range and, for me, the most enjoyable of the lot from behind the wheel.