The Lamborghini Huracan Spyder opens up to allow that glorious V10 to be heard in full - but is it good to drive?

Compromised driving position aside, the right hand drive Lamborghini Huracan Spyder is as sensational to drive as it is to look at. The noise alone is almost worth the £200,000 price tag, and the rest is pretty special too.

The Lamborghini Huracan had some pretty big boots to fill when it replaced the Gallardo in 2014. Its predececessor was the best-selling Lamborghini ever, and with help from parent firm Audi, it set new standards for quality at the Italian maker. The Huracan takes the formula first created by the Gallardo and has used plenty of new tech to give it as much appeal as Lambo's bigger V12 models, including Audi's latest Virtual Cockpit display. And now, Lamborghini has launched the open-top version, the Huracan Spider.

A lime green Lamborghini that has an opening roof, a 5.2-litre V10 and a price tag of £200,000 is always going to get your attention, and that of pretty much anyone who comes within half a mile of such a car. But is the Huracan Spyder an anti-climax after its frankly unbeatable opening act, or does it have the dynamic ability to actually deliver on its aural and visual potential?

Answer; the Spyder, despite its eye-watering price, is no anti-climax on the move. Except for one aspect, which we’ll come to.

Although Lamborghini won’t admit as much, the Spyder’s four-wheel-drive chassis has been sorted a touch to make it more civilised, and more approachable than other Huracans. As a result, it rides with a fair bit more comfort and feels a bit less manic on the move than the rest of the range. 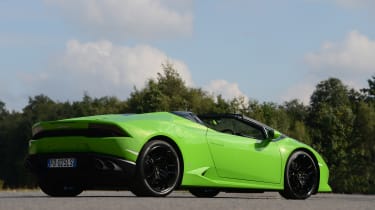 Yet when the right moment arrives and you find some space in which to let rip, the Spyder still delivers the full supercar experience. Its V10 engine revs to beyond 8,000rpm and sounds utterly magnificent when doing so. The engine is the same 5.2-litre unit you get in the latest Audi R8, so as there are no turbochargers, the response to the throttle is instant, and epic, becoming more urgent as you scroll up through the Spyder’s three drive programs of Strada (street), Sport and Corsa (race).

At the same time, the Huracan's suspension and gear change become more focused, while the throttle map also becomes more intense. And yet even on some quite poor UK roads the ride rarely, if ever, genuinely irritates, so long as you leave the car in Strada; in Corsa the comfort levels take a pretty big hit and it isn’t long before you scroll back down to Strada.

Inside, the Huracan Spyder is a serious piece of work, with a cabin that looks and feels a million dollars. The quality is in a different league compared with 10 years ago, while the cockpit has the feel of a fighter jet, with bespoke buttons and the bright red flip-up cover over the starter button on the centre console. And the electric hood glides gracefully up and down at the press of a button, performing a piece of street theatre that passers by will never tire of.

The only issue with the Spyder that’s worth mentioning is the transformation to right-hand drive; for whatever reason, the driving position suffers as a result, with more than a hint of compromise to the pedal positioning compared with left-hand drive versions we've tried.

Beyond this, however, the Huracan Spyder is an absolute gem. One day cars like this will no longer be made by the likes of Lamborghini, and that will be a very sad day indeed.