All-new offering is ready to go head-to-head with prestige rivals. 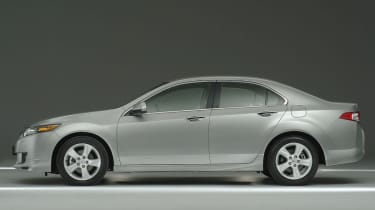 With its sharp new looks and sporty detailing, Honda’s latest Accord is well equipped to take on the very best the family car sector has to offer. Its ultimate challenge to the class-leading BMW 3-Series is likely to be a less straightforward matter – yet improved driving dynamics and peerless build quality are sure to help steer the new model into uncharted territory.

Meet the British-built family car that Honda says will finally take the fight to the BMW 3-Series for honours in its class.

At a top-secret photoshoot, Auto Express became the first magazine in the UK to climb behind the wheel of the new Accord to deliver an all-important verdict.

On sale in June, the Accord will offer a choice of saloon and estate versions. The range will debut a new engine line-up, including a powerful 148bhp diesel, and the car is tipped to be the first in its class to get advan­ced safety features such as lane keep and collision avoidance technology.

Inspired by the concept seen at last year’s Frankfurt Motor Show, the road-ready version takes on a similar, sharp look, with a lower and wider stance than the existing car.

As a result, there’s greater space inside, as well as a smart dashboard and more comfortable seats. Backlit instruments help create a quality feel, and the advanced sat-nav system is clearly presented and easy to use via steering wheel-mounted controls.

In the rear, our saloon provided impressive legroom. Head space is also reasonable and access to the back is easy. The cabin ergonomics are good, with the driving position offering lots of adjustment. A generous boot, tog­ether with split-fold rear seats, adds practicality and versatility.

Under the bonnet, the main focus is the new, second-generation Honda i-DTEC diesel – it makes its production debut in the Accord. We sampled the 2.2-litre version, which delivers 148bhp and 350Nm of torque, at a special event in Tokyo, and our first impressions were favourable.

This unit is more powerful than the i-CTDi it replaces, and it’s hooked up to a new six-speed automatic gearbox. The other engine options are both petrols: a 154bhp 2.0-litre and a 2.4-litre i-VTEC with 197bhp, which features in the flagship. At present, there is no plan for a high-performance ver­sion – although Honda has promised greater emphasis on sportiness with the latest-generation model, together with a more driver-oriented chassis.

New springs and dampers, as well as revised anti-roll bar settings, should mean that this Accord is the best yet in terms of driving enjoyment. The chassis is stiffer than before, too, thanks to new lightweight steels incorporated into the structure. And this hasn’t only provided a benefit in terms of handling; the materials will also enhance the car’s safety rating. According to a Honda insider, it should perform at least as well in crash tests as the very best in the class.

The really good news for potential buyers, though, is that all the improve­ments and additional features haven’t driven up the cost. Prices are likely to be similar to those for the current car – and that means entry-level versions of the Accord should be available from around £18,000. Perhaps BMW will finally sit up and take note!