Makeover aims to give Accord a big lift 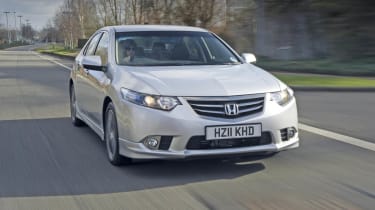 Huge competition in the four-door sector means the Accord has its work cut out stealing sales from the Ford Mondeo and Vauxhall Insignia. Reduced CO2 levels are a step in the right direction and it’s sporty to drive – but there are still cleaner and more established rivals on the market. If the ride was more comfortable and Honda offered smaller, more efficient diesels and a lower-capacity petrol turbo, it could have the clout to make its way to the top of the saloon class.

Blink and you’ll miss it, but the Honda Accord has been overhauled! The Japanese firm has revised its long-standing four-door model with some subtle styling changes and a cleaner range of engines.
Exterior upgrades include clear headlamps and indicators, a consistent red finish for the tail-lights, chrome detailing above the rear number plate and three new colour schemes. Buyers who opt for ES or ES-GT spec also get specially designed 17-inch alloy wheels.
Video: watch CarBuyer's video review of the Honda Accord
[[{"type":"media","view_mode":"content_narrow","fid":"68307","attributes":{"alt":"","class":"media-image"}}]]
But the big news concerns the Accord’s CO2 emissions, which are lower thanks to a series of aerodynamic tweaks and low- friction engine components. Saloon models fitted with the 2.0-litre i-VTEC petrol engine in manual guise and all 2.2-litre i-DTEC saloons now put out less than 160g/km, which is good news for business users in particular.
Honda has also altered the suspension to improve refinement, yet the ride is still unnecessarily firm on rutted UK roads. The steering would benefit from slightly more feedback but it’s responsive enough, while the short, sharp gearchange is a joy to use. Grip is plentiful, too, so the Honda has a sportier edge than most rival saloons.
The 2.2-litre i-DTEC engine requires encouragement from low revs, but as soon as the turbo comes on song there’s a huge amount of torque available, and refinement is good at motorway speeds. Inside, the only new additions are darker dashboard plastics with silver door handles and a matching handbrake lever. The interior is spacious, although some of the materials do seem a little cheap.
With a starting price of £21,695, the basic Accord is considerably more expensive than rivals, yet it comes with larger engines and more kit.
It’s not quite a class leader, but low emissions, powerful and frugal engines and a top reliability record make the Honda a worthy contender.
Share this on TwitterShare this on FacebookEmail