Load-lugging version of latest Accord is ready to tackle prestige rivals. 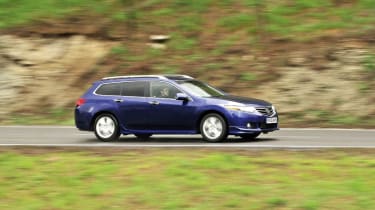 WITH its upmarket feel and individual looks, Honda’s Accord Tourer is a more than capable estate. It may not be quite as spacious as some of the competition, but the car is an extremely competent motorway cruiser, while still showing good ability on twisting roads. Safety features such as Lane Keep Assist are welcome developments, but the newcomer is likely to be costly to buy – some £2,000 more than the model it replaces.

Choices for family car drivers used to be so simple... but that’s not the case these days! For instance, you can buy a saloon that thinks it’s a coupé in the shape of Volkswagen’s Passat, or even a hatchback which doubles as a saloon with Skoda’s Superb.

And the waters are no less muddy when it comes to choosing estates. Size still matters in this sector, but as the new Honda Accord proves, so does style and driver enjoyment.

So, while the latest evolution of the Accord Tourer is clearly a practical choice, the message from Honda is that the car is as much about the all-new chassis and suspension as its load-lugging ability.

As a result, the Tourer aims to win fans with a distinctive sporty design which is every bit as appealing as those on offer from rival companies such as Alfa Romeo and Saab.

Inside, there are supportive seats, plus stylish drilled alloy pedals and a chunky steering wheel. The neatly designed instruments complete the package, with matt silver finishes for both the gearlever and handbrake.

While it’s not an all-new powerplant, it was effective in the previous-generation car, with reasonable fuel economy and decent overtaking performance. It lacks the punch of units such as Ford’s 2.5-litre turbocharged engine, which is available in the new Mondeo, but it does at least offer reasonable refinement. The car we drove, however, was fitted with the company’s five-speed automatic box, which dents its figures quite significantly – stretching the benchmark to a less impressive 9.6 seconds.

But against this, CO2 emissions have now been improved, falling from 215g/km for the manual to 211g/km, which is thanks to a taller fifth gear.

Despite the comparatively dulled performance, the automatic Accord is still a good car to drive. The steering is a bit heavier than on the saloon, and the suspension settings are slightly stiffer, too. This gives it more responsive road manners, as well as a far greater feeling of stability.

However, the Tourer still rides smoothly, even though its sporting nature is clear from the way in which it deals with bumps and undulations. On the open road, the Accord is a genuinely rewarding vehicle to drive – yet it’s out on longer stretches that it really shows its excellence.

Here, the Honda offers class-leading levels of refinement, with wind and road noise kept to an absolute minimum. The car is relaxing, too – not least because of the Lane Keep Assist system which was fitted as a cost option to our top-spec EX version.

The safety feature, which is unique to Honda, scans the road ahead and helps steer the vehicle, reducing the driver’s workload enormously. This is a real bonus on motorway journeys. While choosing a new family car might not be any easier, Honda’s cutting-edge technology should ensure the Accord stands out from the crowd.