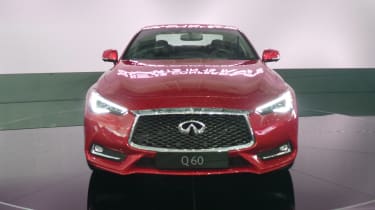 The Infiniti Q60 is on the way, and now the brand has revealed prices for the model range in the UK. The new coupe is set to cost from £33,990 in 2.0-litre petrol form, with 208bhp and four-wheel drive.

We've recently driven the Mercedes C-Class Coupe and Lexus RC, while Audi's next A5 is on the way, so the small premium coupe race is on. Infiniti is hoping to get in on the act with the Q60, which replaces the coupe of the same name that left the UK early last year. 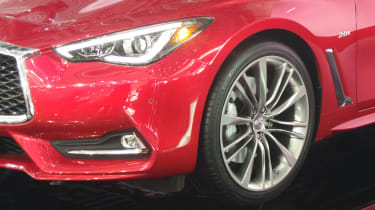 The front of the Q60 is reminiscent of the Q50 saloon, but from the windscreen back, the coupe's low roofline and rising shoulders give it a more athletic look. LED headlights and an active grille shutter for aerodynamics (on the V6 model) are also new.

The Q60 will get 19-inch alloy wheels as standard, with 20-inch rims optional, and there's also a hi-tech suspension system as standard on Sport models. This includes bespoke dampers as well as software changes - with up to six drive modes available: Standard, Snow, Eco, Sport, Sport+, and Customize. 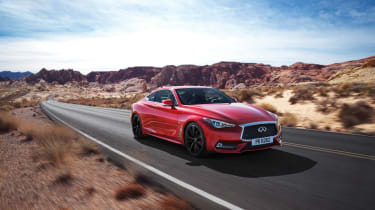 The interior, which looks very similar to that of the Q50 saloon, has been treated to extra insulation to reduce unwanted noise and there's even active noise cancellation inside to filter out annoying noises while on the move. Rather than enjoying the silence drivers can enjoy a 13-speaker Bose sound system, using the latest version of Infiniti's infotainment system.

What do you think of the Infiniti Q60? Let us know in the comments section below...