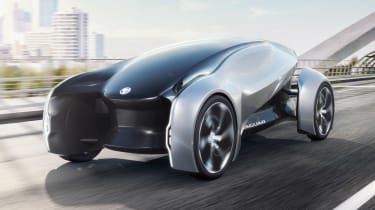 Alongside the reveal of the Jaguar E-Type Zero prototype and the announcement that JLR plans to electrify every new car it makes from 2020 onwards, Jaguar has issued what it calls its ‘vision for 2040 and beyond’, with a new virtual concept car revealed at the group’s Tech Fest in London.

Called the Jaguar FUTURE-TYPE, it’s described as being a ‘premium compact on-demand vehicle concept’, and ticks all of the auto industry futurologist boxes, being autonomous, all-electric, and designed for car sharing.

Central to the concept is the unique steering wheel. Called Sayer – named after the designer of the E-Type – it’s a removable unit that uses artificial intelligence (AI) and voice recognition to carry out tasks such as summoning the vehicle and acting as a personal concierge. 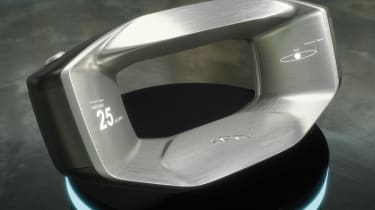 When framed within a car-sharing context, car-club owners would only need to own the wheel to access any vehicle compatible with it. Jaguar says than an on-demand fleet of FUTURE-TYPEs with variations of the 2+1 seating layout would enable car club owners to pick and choose a vehicle exactly suited to their needs, while the concept’s ability to communicate with other vehicles on the road would enable shorter, safer journeys. The narrow width of the vehicle also means it would take up less space on the road and in car parks.

The wheel has been built for driving too though, and can recommend stretches of road where the driver may prefer to take over and disable the FUTURE-TYPE’s autonomous drive functions.

“FUTURE-TYPE offers an insight into the potential for driving and car ownership in the future. It’s part of our vision for how a luxury car brand could continue to be desirable, in a more digital and autonomous age,”explained Jaguar design boss Ian Callum.

Do you like the FUTURE-TYPE? Let us know in the comments section below...