New Jaguar XF saloon surpasses standards of its superlative predecessor – but is it a new class leader?

With the XE showing that Jaguar could finally take on and beat the Germans, we should have expected the Jaguar XF to make a similar impact. And yet, it still seems quite incredible that the marque has managed to take all the original car’s positive points and create a replacement that is still ultra-desirable, but betters its key competition in terms of driving fun and interior space. The XF could well be the new class leader.

Jaguar turns 80 this year, but the leaping cat is far from being on life support. In fact, despite its advancing years, 2015 is one of the busiest years ever for the luxury manufacturer – if not the busiest.

The year kicked off with the brand’s most important model in a generation – the BMW 3 Series-rivalling XE. There have been updates to the F-Type and XJ, and even the E-Type Lightweight’s been brought back to life. That’s before you mention starting out on fresh ground with the F-Pace SUV. The real news, however, is the all-new XF. It sits at the heart of the range, and this is our first test.

While the XE and F-Pace put Jag into new territory, the XF has been the maker’s best seller since its 2007 launch. The UK market buys more than 10,000 every year (still small fry compared to the nearest German rivals, though), and it created the brand’s new face. 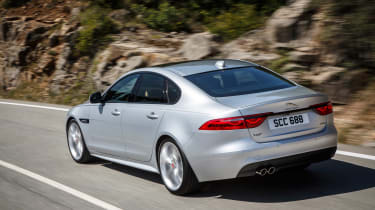 However, the second-generation car’s development has been a tricky task – which would explain why, behind all the chatter of the new ‘baby’ XE, Jaguar’s engineers have been quietly concentrating on bettering the original XF concept. So the model’s gone on an intensive diet, space has been increased, new engines lie under the bonnet and there’s a big infotainment system upgrade.

The styling is a successful evolution over the old XF’s, too – but it still takes cues from the smaller XE. In fact, from the front, the two saloons are near-identical. A power bulge – taken straight from the XJ6 of 1968 – and sleek, cat-like headlights with built-in J-blade daytime running lights are pure Jag.

To the side, there’s a coupé-like roofline and high waist that blend elegantly into the rear haunches, but it’s at the back where the XF looks its best. While the XE appears as though its boot has been sawn off, the XF is longer and more graceful. Sportier R-Sport and S models add a little drama, too, as they get a bodykit and larger front air grilles. 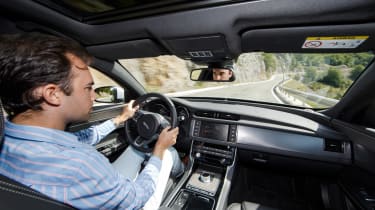 Inside, it’s clear that the baby XE’s created a design theme for Jag saloons, as the centre console and lower half of the centre stack are taken straight from it. So is the eight-inch touchscreen that includes the slick app-based InControl Touch infotainment system - it's a big step up from the system you found in the old XF but still lags a little behind BMW's highly intuitive iDrive. You’ll be able to upgrade to a 10.2-inch screen with InControl Touch Pro by the end of the year. Instead of short-cut buttons, this relies on a Windows Phone-like app screen and built-in wi-fi.

The dials can be upgraded to a crisp 12.3-inch TFT display, but the new infotainment system means the old XF’s central air vents no longer turn when the starter button is pushed. Happily, the outer-most ones do – and the rising gear selector also returns.

Overall cabin quality is good, if still a step behind that of the Audi A6. However, it beats the Audi, BMW 5 Series and even the Mercedes E-Class for rear space. Jag says this is class-leading, and with an extra 15mm of legroom, 24mm of kneeroom and 27mm of headroom over the old XF, it feels that way. The 540-litre boot also trumps its rivals’. 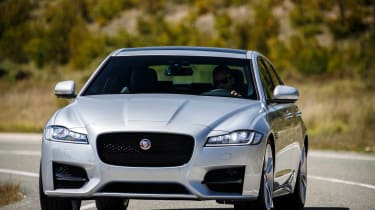 The engine range is fairly simple. For now, there’s only one petrol – the F-Type’s 3.0-litre supercharged V6. With a boost to 375bhp and available only in range-topping S trim, it’s the performance car until the R and SVR arrive.

It’s the diesels that are of real interest, though. There’s Jaguar Land Rover’s trusty 3.0-litre V6, tweaked to push out 296bhp and a whopping 700Nm of torque, and two 2.0-litre Ingenium engines in 161bhp and 178bhp forms. We got behind the wheel of the latter linked to an eight-speed auto, and – just as in the XE – the 2.0 diesel is a triumph. 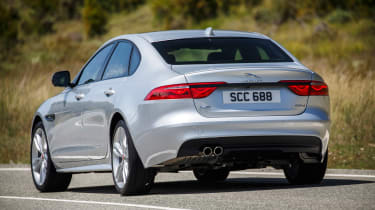 If you’re expecting a punchy engine you should look elsewhere, as Jag’s diesel delivers its slug of power in a more relaxing way – only above 4,000rpm will the car crack on, emitting a muted diesel clatter. That eight-speed box shifts between ratios with real ease, but it works slightly more slickly with the 3.0-litre diesel.

On the move, and with most of the body and chassis made out of aluminium, clever suspension has been fitted all round. Up front there’s a double-wishbone set-up, while at the back Jaguar’s engineers have installed a new system called Integral Link. This intelligently manages lateral and longitudinal movements to deliver the best handling possible at all times.

V6 cars can also be specced with Configurable Dynamics, which continuously vary the damping, steering and box. Speaking of steering, the electric set-up is as crisp and as direct as in the XE, but a bit heavier; it matches the 5 Series for fun. 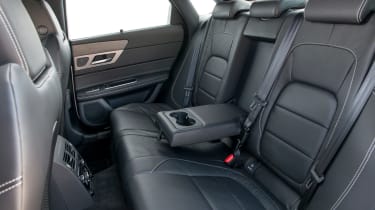 The XF range kicks off at £32,300 for the Prestige 2.0d 161bhp, which comes with 17-inch alloys, heated leather seats, sat-nav and rear parking sensors as standard. An extra £1,900 gets the racy R-Sport, which adds a bodykit, 18-inch wheels, sports suspension and front parking sensors, while for a further £2,200 Portfolio adds electric seats, keyless entry, parking camera and a 380W Meridian sound system.