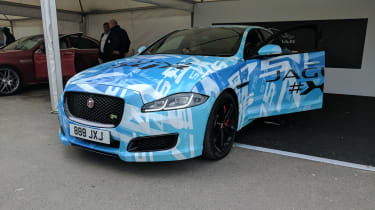 It might struggle for attention next to the storming XE SV Project 8, but it seems Jaguar has also used the 2017 Goodwood Festival of Speed to debut an updated version of the XJR super-saloon. 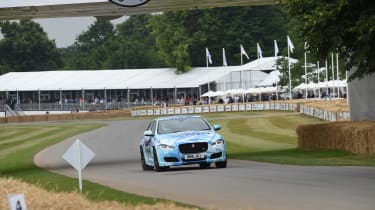 The camouflage itself consists of the numbers '575', and Auto Express is led to believe that this is referencing an enlarged power output from the supercharged 5.0-litre V8. Previously at 542bhp, the new unit is now expected to produce the same 567bhp as the F-Type SVR sports car, while torque should rise to around 700Nm.

Those chunkier figures should produce a small improvement on the standard car's 4.4 second 0-62mph time, athough the limited 174mph top speed is unlikely to change. There is no indication yet as to whether or not Jaguar will make any revisions to the suspension or brakes.

We could see improvements to the cabin, however, with some updated tech and material changes. Expect the car to be pricier than the current £92,000 list price when it arrives later this year.

Are you excited by the updated Jaguar XJR? Let us know in the comments section below...